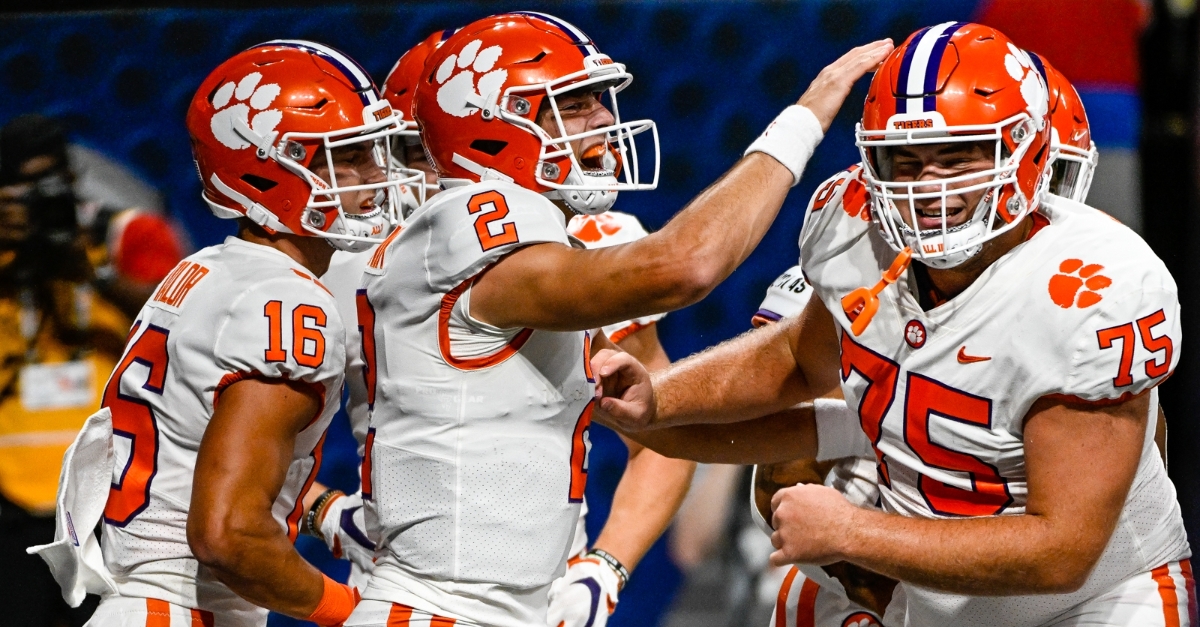 CLEMSON – Cade Klubnik shined in his first collegiate action, leading his team to a touchdown on his first drive. His second game was far different, but he will continue to get playing time as the coaches look to get the talented freshman some experience.

Offensive coordinator Brandon Streeter told the media Monday that getting Klubnik snaps with the first team was all part of the plan.

"It was something we decided actually, earlier this week, you know, we really wanted no matter what the situation, we wanted to get Cade in, sometime in that second quarter," Streeter said. "And it just worked out perfectly on how it went, you know. Three touchdowns, three for three and then get Cade in there.

"Trying to get him some valuable experience. You know, a meaningful experience whenever that first offensive line was in and just getting him in there earlier in the game. So able to do that.”

It’s all about making sure the Texas native has confidence to lead the team if he’s needed.

"I think he only had three or four plays maybe in the first half but we got him in there a little bit at the end too, so just trying to build his confidence, too,” Streeter said. “Young player that's got all kinds of talent and we saw what he can do already but just got to learn a couple of things; throw the ball away, not taking a sack, but man, just super proud of him."

For now, however, his playing time will be taken on a week-to-week basis.

"This week was just one of those one-week deals where we felt like, 'Hey man, let's get Cade in there,'" Streeter said. "And I think from here on out, we'll kind of evaluate how we're playing, you know, and see where we're at, and then kind of go from there."

Starter DJ Uiagalelei improved from week one to week two, and he gave his receivers the chance to make plays.

"Yeah he's worked on that a lot. No. 1, giving the guy a chance to make a play. When we give a guy a chance, it could be a big play or PI (pass interference),” Streeter said. “We have worked on those throws a good bit, not overthrowing and putting more air under it. I believe he's getting better and better at it."

Streeter said Uiagalelei also showed more poise in the running game, whether that was taking off when needed or on designed runs.

“Him moving around and being able to escape the pocket and move better than in the past is big. He's got a ton of confidence in that now,” Streeter said. “He made some unbelievable plays Saturday with his legs and also in the scrambling situations to Antonio (Williams), Beaux (Collins), and a couple other guys.

"You also saw him stand in the pocket and show his strength; he's a big kid that can hold up in the pocket where guys aren't able to make those arm tackles and he can step up and hang in there longer and make the play, to Beaux on two of those plays. Being able to extend plays is a big part of being able to play quarterback."

Uiagalelei is completing almost 68 percent of his passes this season, going 40-for-59 (67.8%) for 441 yards, three touchdowns and one interception, and

Streeter is hopeful that Uiagalelei takes his growing confidence into this week’s game against Louisiana Tech.

"He's put two games together that are solid games, not perfect, but he can gain confidence from those games,” Streeter said. “Now he can really go clean up some of the little details to make it that much better."