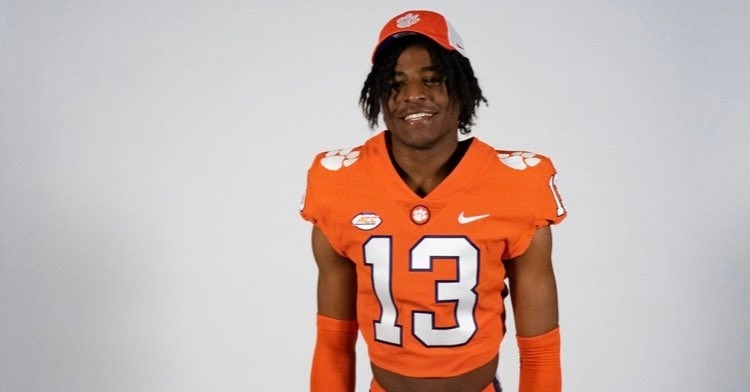 One of the Tigers’ top remaining targets for the 2022 recruiting cycle visited campus this past weekend with his parents and the returns are more than favorable.

Three-star safety Kylon Griffin out of Montgomery (AL) Montgomery Catholic Preparatory was one of four 2022 visitors to Clemson last weekend as the coaches try to put the finishing touches on this recruiting class. Griffin visited with his parents and told TigerNet that several things stood out.

“I loved it up there. The whole coaching staff, they really stood out,” Griffin said. “Just really great people. I love just seeing how Dabo (Swinney) has really built the culture.”

Griffin and his parents arrived on Friday evening, had breakfast and dinner with the coaches and visitors Saturday before winding up at Swinney’s house for supper Saturday night.

“I just loved how everyone was just so comfortable around each other,” Griffin said. “Everyone seemed like a family. Even though some of us had never been around each other or seen each other before, it seemed like we had known each other for forever and no one was scared to talk. My mother and father really loved the trip and they loved it as well. They thought the same as I did, if not more.”

Griffin spent most of his time with safeties coach Mickey Conn.

“He was just preaching to me about what Dabo has built,” Griffin said. “The program is built more about being a great person than a great football player.”

His player host was safety Andrew Mukuba, who had the same message as the coaches.

“He was just telling me that they invest in you as a person and work on that first,” Griffin said. “Then they work on you being a great football player.”

“Those people, they are just all are built the right way and do the right things and that leads to big things on the football field,” he said.

Griffin was supposed to take a visit to USC next weekend, but now isn’t sure what his plans are, and a decision may come sooner rather than later.

The 6-foot-1, 180-pound Griffin is rated the No. 978 overall prospect, the No. 7 safety and the No. 40 recruit in Alabama, according to the 247Sports Composite. He is the No. 85 safety prospect in the 247Sports rankings. In addition to Clemson and Nebraska, Griffin also holds offers from Boston College, Mississippi State, Florida State, Tennessee, Penn State and Michigan State.

He was a one-time Mississippi State commit, but he backed off that pledge on Dec. 1.

Had an amazing time at Clemson this weekend. Thanks to all and I really appreciate it???????? #ALLIN #Clemson pic.twitter.com/OdulBA6fxe