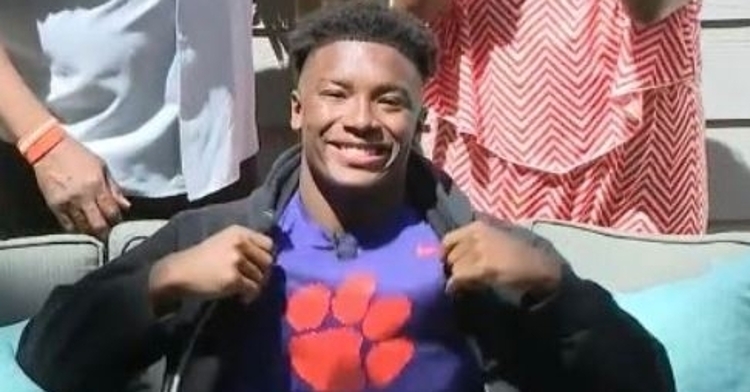 Carter will arrive in Clemson in the early summer.

Clemson brought in two of the best linebackers in the nation for the 2021 class, landing Jeremiah Trotter Jr. and Barrett Carter. Trotter Jr. has been impressive since enrolling early, and Carter will make his much-anticipated arrival over the summer.

Carter comes to Clemson as one of the highest-ranked players in the ’22 recruiting rankings, with 247Sports ranking Carter as the No. 1 outside linebacker and the No. 17 player in the nation. The 6-1, 220-pound 5-star from Suwanee (GA) North Gwinnett committed to Clemson last May, with defensive coordinator Brent Venables and safeties Mickey Conn leading the way in the recruitment for Carter.

Carter was excited about watching the Clemson defense at the spring game and is eager to join that defense soon. Venables uses athletic players in multiple ways, and Carter anticipates giving Venables another versatile weapon.

“The defense looked good! As I was watching, I was getting more excited because in a few months I’ll be out there, God willing,” Carter told TigerNet. “Coach V has said he will use me in a very versatile way like Isaiah Simmons was. I’m thinking I’ll line up at a few positons, such as SAM linebacker, nickel, safety, and their dime player.”

Carter has used his offseason to prepare for his arrival to Clemson both mentally and physically.

“Preparation as of right now is just getting bigger, faster, and stronger, as well as finishing up strong in school,” Carter said. “I’ve been hitting the playbook pretty hard, along with workouts and field work. I’m also healing my ankle from when I broke it back in September. It’s getting better every week. After I broke it, I played the rest of the season on it so that made it worse. But I’m almost 100-percent now.”

Carter has high praises for the ’21 Clemson recruiting class, and also expects big things for the legacy that his class will leave.

“We have the best student-athletes in the country coming in,” he said. “Our legacy is that we want to win four national championships and all of us finish strong in school every year.”

Carter’s final season of high school football was capped off by him being named as the Defensive National High School Player of the Year by the All-American Bowl, as well as being named to the 2020 Georgia MaxPreps All-State football team. Carter brings a ton of accolades with him to Clemson and will also provide valuable leadership.

“The fans can expect me to give my all every game and do anything in my power to lead my team and make sure we get the win,” Carter said. “I’m just excited to start this new journey and take the next step into the future. I’m looking forward to leaving my legacy and just meeting new people. I’m also excited about all the gear and traveling.”