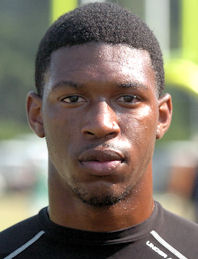 Defensive Back
B I O
Has a 4.39 shuttle and a 31 inch vertical. He finished his junior season with 104 tackles and four interceptions. Offensively, he had 35 receptions for 356 yards and eight touchdowns. Offered by FSU as a freshman. He plans to make an early decision. He has taken unofficial visits to Auburn, Louisville, Georgia, Clemson, Florida, and Alabama. He has camped at Florida, Alabama, Georgia, Clemson and FSU. Class of 2012 ESPNU 150 Watch List Recruit. FSU NFTC DB MVP. Has accepted invitation to play in the U.S. Army All-American Bowl. He is ranked #2 player in Florida by ESPN.

Good vocal leader and elevates others around him. A big, physical DB with long arms that can play safety at the next level or play corner for a team that likes to press. He has great leaping ability and a very physical tackler.