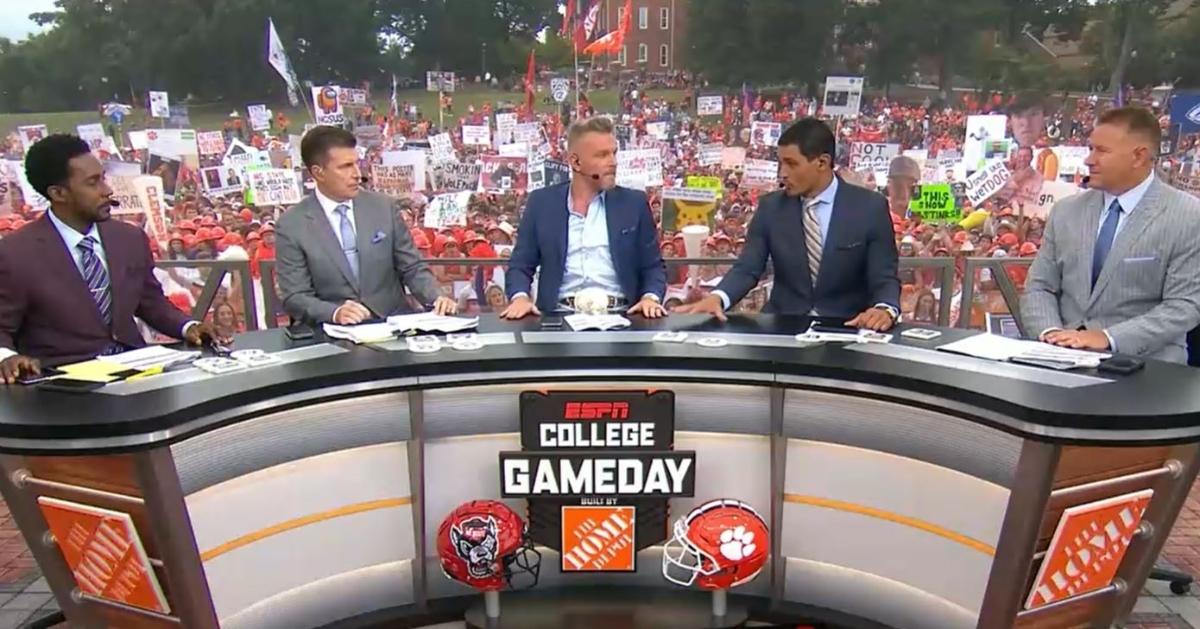 Clemson returned to Bowman Field for the first time since 2016 on Saturday.

ESPN’s College GameDay returned to Bowman Field in Clemson for the first time since 2016 for a show on Saturday.

Longtime analyst Lee Corso was not with the crew, however, as ESPN said he was not feeling well.

Clemson is a 7-point favorite in the matchup.

David Pollack: Clemson - "It's very, very interesting to see this matchup. Here's to me the biggest difference, the last 36 teams that have come to Death Valley have done what? They've took an L...This is a lower-scoring game but because of this crowd -- a few false starts from NC State and better secondary play, Clemson gets the W."

Rece Davis: Clemson (but NC State against the spread)

Chris 'Bear' Fallica: NC State - "If you look at the NC State defense, you see seniors...That is a lot of experience. I think they have a lot going for them tonight..."

Desmond Howard: Clemson - "Clemson's defense got exposed a week ago, but I think they're going to bounce back and play a better game. Everyone's talking about DJ Uiagalelei, but I think Will Shipley is the guy to keep an eye on tonight."

Pat McAfee: NC State - "DJ Uiagalelei may have had his best game last week, but with that being said, the NC State Wolfpack defense...give me NC State to upset the record books in Death Valley."

GIVE ME NC STATE THE WOLFPACK

Christian Wilkins: Clemson - "I think this is a game -- DJ Uiagalelei has gotten better and better each week. I think this is a game that he puts college football on notice and lets everyone know that he's for real. I think the defense is going to be on it tonight. Dave Doeren and NC State have been our little brothers in the ACC. They struck lightning last year but lightning isn't going to strike here twice. I'm going with the Tigers..."

Analysis from earlier in the show: