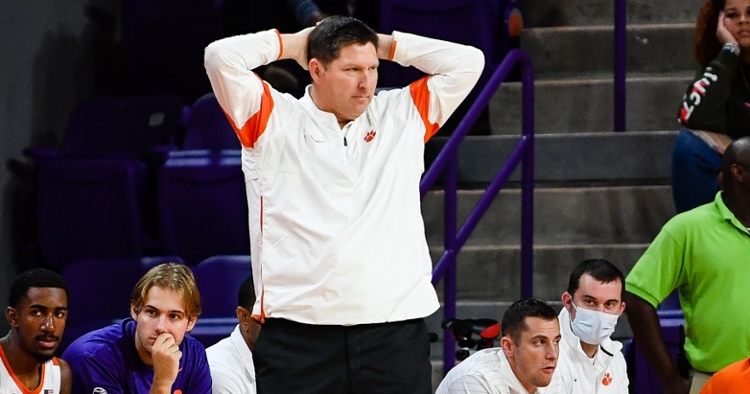 Clemson dropped a heartbreaker to BC Saturday night.

CLEMSON – Boston College rallied from a 23-point first-half deficit and didn’t hold a lead until the final seconds in handing Clemson a 70-68 defeat in Littlejohn Coliseum Saturday evening.

It was the first road win for Boston College, coached by former Brad Brownell assistant coach Earl Grant, in 23 months. The Eagles improve to 7-8 overall and 2-3 in the ACC, while Clemson falls to 10-7 overall and 2-4 in league play. The loss, considering the Eagles’ struggles this season, dismal performance on the road, and the Tigers’ big lead, stands as one of the worst of the Brownell era.

Brevin Galloway, from nearby Seneca High School and the younger brother of former Clemson tight end Braden Galloway, dropped in 17 points in a clutch effort. His late 3-pointer gave the Eagles their first lead of the game with just 26 seconds remaining. Makai Ashton-Langford scored 19 to lead the Eagles. Al-Amir Dawes scored 17 to lead Clemson, while David Collins added 15 and PJ Hall 12.

Collins was 0-5 from the free-throw line. The loss broke a nine-game winning streak for the Tigers in the series with the Eagles.

The Tigers started hot, with Dawes hitting a 3-pointer and a layup for a quick 5-0 lead, and when PJ Hall hit two free throws and Dawes another jumper it was 9-0 just three minutes into the game. The Eagles responded with a small run of their that made it 13-7, but Dawes hit another 3-pointer that started a 9-0 run that was part of a larger 21-4 run over the next several minutes that saw the Tigers grab a 34-11 lead with 7:11 to play in the half.

It was then Boston College’s turn for a run, finishing the final seven minutes on a 21-5 run and the Tigers held a slim 39-32 advantage at the break.

A short jumper by Hall gave the Tigers a 9-point lead at 43-34 early in the second half, but the Eagles kept up the pressure. When Makai Ashton-Langford dropped in a fastbreak layup five minutes later, it completed a 14-6 Boston College that saw the Tigers’ advantage trimmed to just one at 49-48 with a little over 12 minutes to play.

Clemson kept a working margin of anywhere from three to seven points over the next seven minutes, but when Brevin Galloway (the younger brother of former Clemson tight end Braden Galloway) stepped in and drilled a long 3-pointer at the 3:10 mark, Clemson led just 66-64 and forced Brownell to call a timeout.

The Tigers then cycled through three fruitless possessions, and TJ Bickerstaff got loose inside for a layup that tied the score at 66-66 at the 1:48 mark. A minute later, Collins shook free at the top of the key and dropped in a smooth shot for a 68-66 lead at the 35-second mark, but Galloway came roaring down the court and calmly stepped into another 3-pointer from the right win for a 69-68 lead (the first Eagle lead of the game) with just 26 seconds left on the clock.

Following a timeout, Collins threw up a contested shot in the lane that bounced off the rim, and the Tigers had to foul when the Eagles grabbed the rebound. Ashton-Langford hit one of the free throws with 15 seconds left for a 70-68 lead.

The Tigers cycled through two rushed shots, but Collins was fouled on the second shot with just two seconds left to play. However, his free throw struggles continued and he missed both shots and the Eagles were able to run out the clock for the win.

Clemson returns to the court Tuesday, traveling to Syracuse to take on the Orange in a 9 pm tipoff in the Carrier Dome. The game is set to be carried on the ACC Network.