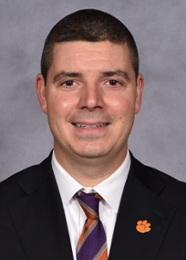 B I O
Lucas McKay returns for his 10th season with the men’s basketball program in 2021-22, his second overall as director of recruiting. McKay spent the previous two seasons as an assistant coach at UMKC. Prior to that, McKay spent the 2018-19 season as director of recruiting and four seasons as director of operations. McKay assumed that promotion in 2014 after serving as Clemson’s video coordinator for four seasons. In four seasons as director of operations, McKay has helped the Tigers to a 45 ACC regular season wins, including a school record 11 in 2017-18. That season, the Tigers turned in a banner year for the program with 25 wins and a trip to the NCAA Sweet Sixteen. The Tigers finished tied for third in the ACC after being picked to finished 13th by the media in the preseason poll. The 25 wins were tied for the most in program history. Clemson’s 2013-14 team reached a 10-win improvement over the previous season, finishing 23-13 overall and 10-8 in ACC play. The Tigers led the nation in three-point percentage defense (.285) and were ranked among the NCAA top 10 in scoring defense (58.4 ppg) and blocks per game (6.1). In 2011-12, the Tigers were 16-15 overall, but rallied to an 8-8 conference record. It was Clemson’s fifth straight season at .500 or better in ACC play, a program record. The Tigers knocked off three eventual NCAA Tournament foes, including Sweet 16 participant NC State, during the 2011-12 season. McKay was an important part of the Tiger staff in 2010-11, when Clemson compiled a 22-12 overall record and advanced to the NCAA Tournament for a record fourth straight season. The Tigers were 9-7 in the ACC and earned a first-round bye in the ACC Tournament by virtue of being the No. 4 seed in the conference. Clemson also won its first NCAA Tournament game in 14 years in 2011 when the Tigers knocked off UAB, 70-52, in Dayton, Ohio, as part of the “First Four” round. McKay first worked under Brownell as a student manager at UNC Wilmington from 2003-06. He was a manager on Brownell’s last team at UNC Wilmington, the 2005-06 squad that went 25-8 and won the Colonial Athletic Association championship en route to an NCAA Tournament appearance. The Seahawks compiled a 59-33 record while McKay was a manager with the team. McKay earned his undergraduate degree in political science from UNC Wilmington in December 2006. He has worked several regional and national camps, including ones at Clemson, as a coach and administrator. After graduation, he spent one year as an assistant coach at Harrells Christian Academy before rejoining Brownell at Wright State in 2007. He worked as an administrative assistant under Brownell at Wright State. In three seasons with the Raider program, Brownell’s teams put together an overall record of 61-35. McKay oversaw the day-to-day organization of the basketball office. His duties included supervision of the managerial staff, organizing recruiting mailouts, arranging travel and video editing. He earned his master’s degree in student affairs in higher education from Wright State in June 2009. McKay is married to the former Lindsay Martin of Newton, N.C. They have a son, Ethan, and daughter, Emerson.