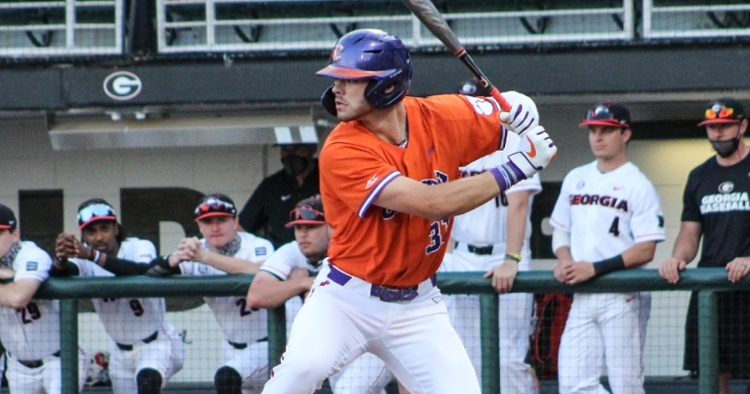 ATHENS, GA. - Parks Harber lined a one-out double to score Buddy Floyd in the ninth inning in No. 21 Georgia's 8-7 walkoff victory over Clemson at Foley Field on Tuesday night. The Bulldogs, who won both games of the home-and-home season series, improved to 24-12, while the Tigers dropped to 15-18.

In the top of the seventh inning, Kier Meredith and Caden Grice hit run-scoring singles, with the latter tying the score, then Jonathan French grounded a two-out single to score Grice and to give Clemson a 5-4 lead. The Tigers added another run in the frame on a wild pitch. Georgia came right back and tied the score on Cole Tate's two-run homer, the Bulldogs' fourth long ball of the game, in the bottom of the seventh inning. In the eighth inning, McAllister laced a run-scoring single with one out to give Georgia the lead.

In the top of the ninth inning, Grice led off with a single and scored on French's sacrifice fly to tie the score. With runners on first and second, the Bulldogs turned a double play to get out of the inning. In the bottom of the ninth inning, Floyd drew a one-out walk and advanced to second base on King's single. Harber then hit a liner to left-center, where J.D. Brock made a diving attempt. The ball hit the ground first and rolled towards the wall, allowing Floyd to score the walkoff run on the double.

The Tigers return home to host Wake Forest in a three-game series, beginning Friday at 6 p.m. on ACC Network Extra.

Comes through again as Georgia takes down Clemson. Handing them their 7th straight....L. ?? pic.twitter.com/ZjCeOclFgn

Packers coach 'really excited' about what Amari Rodgers can do
Post your comments!