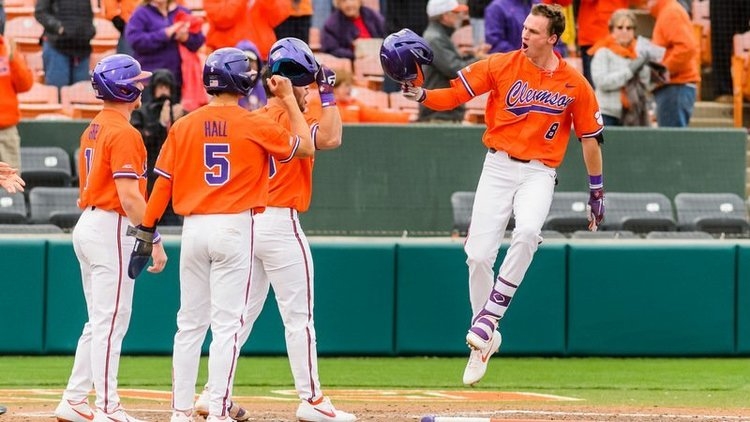 CLEMSON, S.C. - Bryce Teodosio's grand slam in the fifth inning and 5.0 strong innings pitched by freshman starter Davis Sharpe propelled No. 14 Clemson to a 7-2 victory over South Alabama in the first game of a doubleheader at Doug Kingsmore Stadium on Saturday afternoon. The Tigers took a 2-0 series lead and improved to 2-0 on the season, while the Jaguars fell to 0-2.

Sam Hall scored on Logan Davidson's sacrifice fly in the first inning, then Teodosio belted his first career grand slam to center with two outs in the fifth inning. After Wells Davis' two-run homer in the top of the sixth inning, Hall responded with a solo homer in the bottom of the sixth inning, then Hall scored in the eighth inning on Kyle Wilkie's sacrifice fly.

Sharpe (1-0) earned the win in his first game as a Tiger. The righthander allowed just two hits, no runs and two walks with eight strikeouts in 5.0 innings pitched. Jaguar starter JoJo Booker (0-1) suffered the loss, as he yielded three runs on three hits in 4.1 innings pitched.

The series concludes with the second game of the doubleheader on Saturday at 5:05 p.m.