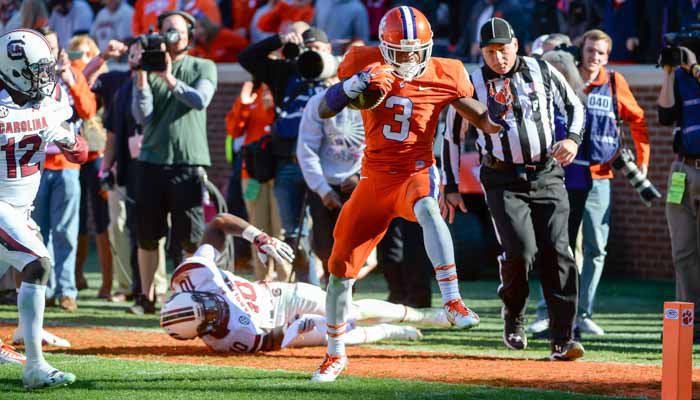 This is a different South Carolina team than Clemson faced in its last trip to Williams-Brice. The Gamecocks were riding a 17-game home winning streak the last time the Tigers played in Columbia. Since that game, the Gamecocks are 6-6 at home. They have a two-game losing streak at home including last week's loss to The Citadel.

The last time Clemson visited Williams-Brice, South Carolina was 9-2, ranked tenth in the country, and Steve Spurrier was the head coach. They enter Saturday 3-8, and Sean Elliott will lead South Carolina out of the tunnel after their mascot Cocky magically appears in that box.

South Carolina's offense has struggled this year, and it has been musical chairs at quarterback. Perry Orth has settled in and has completed 130-of-233 attempts for 1,710 yards with nine touchdowns and eight interceptions.

Brandon Wilds leads the Gamecocks in rushing with 559 yards on 120 carries and three touchdowns. Lorenzo Nunez is second with 300 yards but hasn't played lately due to injuries while being replaced by Orth.

A major issue is the offensive line. Brandon Shell and Mike Matulis man the left side as seniors while Alan Knott, Will Sport and Blake Camper are listed as starters this week at the remaining positions. Mason Zandi has been the starting right tackle, but he is listed as doubtful for Saturday.

Defensively there have been major issues stopping the run for South Carolina. The Gamecocks appear to lack playmakers up front and also have issues rushing the passer. Gamecock observers have questioned the coaching staff and their game plans on defense again this season.

The Gamecocks are about a 17-point underdog for a reason. They will need their best effort and some help from Clemson in order to keep this one close.

Clemson played very well on the road at Miami but didn't have its "A" game in road games at Louisville, NC State or Syracuse. I do expect the Tigers to win Saturday, and I can see it being a convincing win. However, I don't expect a repeat of the 63-17 mauling. South Carolina will play hard and play with pride, but the Tigers are too talented and will finish this season 12-0 unless the Tigers play their worst game of the season.

We will take tomorrow off for Thanksgiving, but will have an email blog Friday. Have a safe and happy Thanksgiving.