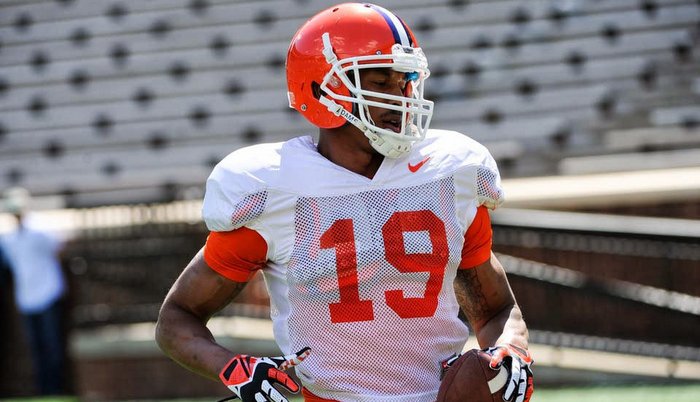 How gratifying it was to see Tony Steward

Tony Steward
Linebacker (2011 - 2014)
#7 6-, 235
Hastings, FL
View Full Profile have a nice season a year ago. He grinded through injuries to finish strong and make it to the NFL. Hopefully we can see a breakout year from Charone Peake

You make a good point about Steward. I hope he makes it in the NFL. Peake is similar due to knee issues on more than one occasion. Peake is a good kid that is easy to pull for. I have big expectations from Peake this season. I think he is an NFL-type of talent.

I was listening to your show regarding stadium improvements this morn. I didn't get to hear all of it but I was hoping you could include the port-a-potty situation in your list. It seems there are the same number of port-a-potties out whether its Wofford or South Carolina. Most games not a problem, but big games, especially at night, become a mess. There are long lines and it seems like the ladies don't want to sit. Consequently along about 4 in the afternoon things deteriorate into completely unsanitary conditions.

I would suggest some common sense would indicate a few extra for the big games.

Thanks in Advance - JCW

In the "15 for 15" improvements released Wednesday two of the items pertained to restrooms.

*Restroom renovations in the north and south upper decks, and improvements throughout the stadium.

*More restrooms. New portable trailer restrooms located around Littlejohn Coliseum as it undergoes renovations, and a significant increase in restroom locations in tailgating areas throughout the athletic district.

They will have the nicer trailer restrooms near Littlejohn.

The problem with mobile restrooms is that everyone wants them close but not too close. The athletic department gets complaints about not having enough, but when they put them out the people that park close to them also complain.

I do think you will see a continued effort to keep improving this situation.

I’ve been complaining about stats in DV for years…..keep the pressure on!

Clemson associate athletic director Joe Galbreath was a guest on my show this week and says they heard the complaint and are working on making it better. I hope so.

You're dead on regarding the end zone recognitions during (seemingly) every timeout.

2)real time scores ticker continuously scrolling across bottom of stadium video screens. My wife's from Nebraska and they've had this for over 15 years.

The presentations are necessary, but the frequency takes away from their uniqueness.

I would love WiFi in the parking lots. I am not sure how feasible that is in some lots, but that would be great.

I have complained about scores for a few years. This seems like a simple solution. Because TV does it, I think we all expect it now.

This is the 50th year of Howard's Rock being in the valley. Next year would be the 50th season of actually touching the rock. Seems to me we need something special done for this either this year or next year or both.

When the Clemson team gathers to Run Down The Hill, the players rub Howard's Rock because of the mystical powers it is supposed to give Clemson players. The rock is mounted on a pedestal at the top of The Hill and was given to Coach Frank Howard by a friend (S.C. Jones '19) who picked it up in Death Valley, CA. The Rock was first placed on the pedestal at the top of The Hill on Sept. 24, 1966, a game Clemson won 40-35 over Virginia. The team started rubbing the Rock for the first game of 1967, a 23-6 win over Wake Forest on Sept. 23, 1967.

Thanks for the email. That one snuck up on me. I didn't realize the anniversary was already here. I haven't heard of any plans, but my guess is next year is when we would celebrate.

Bennie Cunningham
Tight End (1972 - 1975)
#85 6-5, 250
Seneca, SC
View Full Profile , Kevin Orcutt, Alan Finley, and our great country and the men and women in uniform that protect and serve it every day, plus their families.