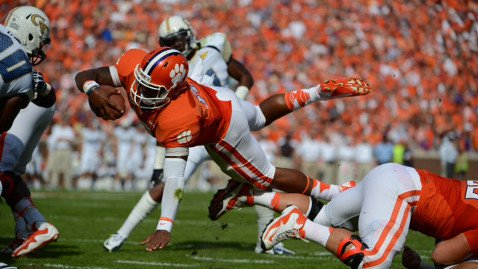 What feedback have you heard concerning the Thursday night game operationally?

I went and had no issues. I did notice there were a lot less fans tailgating than for a normal game...even less than a noon kick. The stands looked OK but emptied quickly upstairs in the second half.

Obviously Thursday night games are not ideal in a place like Clemson. But all in all, I think it went about as well as could be expected.

Let me know what you've heard.

I agree that it went as well as can be expected. I have not heard of anything major in terms of operationally but I would be surprised if anything has really changed as far as the future is concerned. Clemson has been and in my opinion will continue to avoid home Thursday games.

We have truly been blessed.   This Saturday will mark the end of two spectacular careers that we thought we might not ever see after CJ Spiller.  We all talked about how special it was to experience CJ’s talent in Death Valley and yet, we have been blessed to see two more in Tahj and Sammy.  I remember CJ’s last game when the crowd starting chanting his name.  I hope we do the same this Saturday for  Tahj.  I also hope we continue and give Sammy the same.  We are truly blessed to see such extraordinary athletes and, more importantly, extraordinary individuals.   Maybe Deshaun Watson, Mike Williams

Mike Williams
Fr. Wide Receiver
#7 6-5, 205
Vance, SC
View Full Profile or some other future player will be a Ring of Honor recipient, but for now feel blessed.

Great email. I thought Spiller was a once in a lifetime kind of player but we have been blessed to have two record setters in Watkins and Boyd. Saturday will be a special day and I hope all fans will join in and show their appreciation for the guys' hard work and dedication.

Good blog on the hoops team.  I share your enthusiasm about them.  MY question is how does Brownell manage scholarships for next year as we will be two over with the early signees if everyone else stays?  Does Harrison take his mission trip?  Does McDaniels leave early?  Just curious what you see happening.  Thanks.

I don't see McDaniels leaving early. I can see a couple of players seeing the writing on the wall and transfer out of the program to get more playing time. These things usually have a way of working themselves out.

Early in the year almost every kickoff was a touchback, but now we rarely have any. Is that by design or is Pinion fatigued from a long season or nagging injury? Just wondering. That really is a weapon.

It is not by design. He hits some of the strangest looking kickoffs I have ever seen. I have never seen a kick off spiral like it does at times with Pinion. I do know that he had a leg injury back in September but don't know if that is the cause of his recent kickoffs.

Asked you this last year about whether Clemson, as a university, has any goals for membership to the American Association of Universities. Now that the school has a new president, who will also be hiring a new provost among others, I wonder if this item will ever be brought up. Is it even of interest to the university?

I ask now because, as you may know, there are a few ACC schools who are members. UNC, Duke, Virginia are longtime members. Maryland is one but they're bolting. GT joined not too long ago and new member Pitt happens to also be a member. Syracuse was in it but, like Nebraska, essentially got kicked out for unpublicized reasons. So it's clear AAU membership is important to the conference but I don't know if Clemson has kicked around the idea, especially since its academic profile has been on a trajectory for a few years.

FYI, West Virginia isn't a member so I'm not sure President Clements would place importance on this anyway. Regardless it doesn't mean he can't do it at Clemson.

I admit I am ignorant on the AAU and what prestige it holds. I am not sure of the requirements and how membership is obtained. I have not heard any specifics about the plans of the new president. I do know that he plans to start in January but have an official inauguration until later. I am sure we will hear more about his vision then. Maybe some of our readers can provide more information. Sorry, I could not have been more helpful.

Love reading your insight on Clemson sports. My questions are about Mens Basketball.

1.       In football, the dollar figures that we pay to small out of conference schools to come to Death Valley is usually public knowledge. In Mens Basketball, do you know how much we pay schools like Stetson and Delaware State to come to Little John? The basketball program does not have the same revenue as the football program, so I was curious what we pay these schools (if its public knowledge).

2.       I’ve always thought our Mens Basketball non-conference schedule is too weak to prepare us for the ACC portion of our schedule. Do you feel the program needs to schedule tougher non-conference opponents?

I checked with a couple of sources to get an updated number and both said it varied depending on the level of competition. An ACC school expects to pay another BCS conference opponent between $70,000 and $110,000. Lower division opponents receive less. Hope this helps.

As far as the schedule is concerned, the ACC season will be tough regardless but Clemson does play South Carolina, Temple, Auburn, Arkansas and perhaps New Mexico who is ranked. That is not too bad. Plus at the end of the year Clemson usually has one of the nation's toughest schedules due to the ACC.

Do we hang on to Chad this year? I think so. I think most big programs he would want will want him to have substantial seasoning. I still like the scenario of both him and Brent V. being here for a long time, and then one of them succeeding Dabo.

Don’t get me wrong, I am really appreciative of Dabo and what he has done and the strong man that he is at the helm. If he can stay 30 years and maintain his enthusiasm and work ethic, then great. But, the life span of coaches is just shorter now. You will not see the long terms like Bryant, Beamer, etc. into the future due to all the pressure, the money, the internet, etc. I think about 10 to 15 years for Dabo would be a stretch. If we say just 10, then we are at just 5 more til you think about him moving on to another venture. To me, that is ideal timing for either Chad or Brent going forward. My money would be on Chad. I really think that DRad needs to help Dabo do all he can do to retain both guys for as long as possible and think in terms of one of them succeeding at some point in the future. We are establishing our brand, which is a fun offense and an improving defense. Once we shift more to some power running then the ACC and possibly NC will come. Let’s keep the mo going and not allow anything to derail the train in the direction it is now headed.

I agree that the time spent on a job by a head coach is shorter than ever. It is a stressful job and those type of jobs yield heavy turnover. I think Dabo would like to stay longer and I would think Morris and Venables would like to be a head coach sooner. Therefore, I think it is unlikely that both would still be here the next time the job opens up. I think they are the best combination of coordinators in the country and hope Clemson can keep them several more seasons but I also know both are very marketable and want to be head coaches. As far as this year is concerned, I don't know what jobs will be open. Morris will not leave for a job he can't succeed at and I think he can afford to be very selective. It all depends on what jobs come open.

Levon Kirkland
Linebacker
# 0, 0
,
View Full Profile and family, Catherine Sewell, and our great country and the men and women in uniform that protect and serve it every day plus their families.