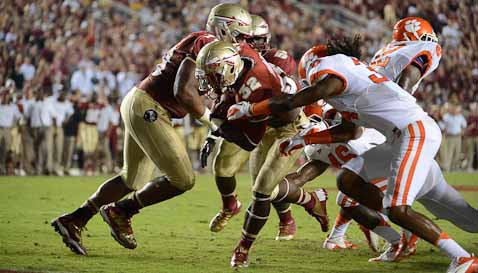 Liked your blog today concerning SoS. Just one clarification.....don't be so sure we play FSU in DV next year. The last time the ACC expanded, we had to play them two in a row down there. Wouldn't put it pass the ACC to do it to us again.

Great point. Never put anything last the ACC. Wouldn't it be like this league to screw Clemson in its biggest season in 30 years?

I'm sure you heard about the cheerleader that was injured in the West Endzone late in the game last Saturday.  Do you know if there is any kind of update on her condition?

I did not know anything about it until your email. I have not heard anything but maybe be of our listeners has. Hope they can add more than I did.

I was just wondering, has Chad taken anyone under his wing to teach the offense to so that they can take over after he is gone. We all know that he is going to be a head coach very soon and I think it is extremely important that we have someone ready to step in and run the same type offense. We can’t go back to the old ways with the guys we’ve been recruiting. Just wondering if you’ve heard anything.

Tony Elliott, Danny Pearman and Jeff Scott have spent countless hours with Morris over the past two years. However, if Clemson pays $1million a year it can go get almost any OC in the country.

It doesn't do any good to argue with the SC fans about leaning on conferences, because thats the only way they'll ever be able to get a piece of the SEC success. They've had the best 3 years in their football's history and what do they have to show for it...11 win season rings?

Also, of course they would rather go to a smaller bowl against a Houston or a UCONN (opps, can't include them), because they have a better chance of getting those elusive bowl wins that they're so unaccustomed to!

Thanks for your email. I need to stop beating my head against that SEC wall. Sounds like you need your own radio show.

Attn: Anyone other than Bama, Florida, LSU and sometimes GA...

Nobody cares what you do or what you win!! Bama fans do not celebrate if Scar wins a bowl game. LSU fans could care less when Arkansas wins a bowl game. Florida doesn't waste a breath on Ole Miss winning a bowl game. GA most of the time do not care what bowl or how many games Miss. St. wins in a season.

Those top 4 care about themselves and that's it. They don't give a damn about a CONFERENCE!!!

Mickey you can't get through to stupid people. As bad as Tennessee is right now they still laugh at Scar fans when they do the SEC SEC chant and raise another banner when Bama or LSU win something.

That theory is stupid! I'm a Clemson fan and all the CU fans I know do not celebrate when Duke or UNC win a national title in basketball. You know why? Because it's not my team and those teams don't care whether we pull for them or not!!

Good luck with these morons Mickey.

You mean the big brother argument doesn't hold water? Guess that's why I have never pulled for the Blue Bellies. Screw the ACC. Hope they all lose ever week.

The situation with Robert Nkemdiche is really strange to me.  I was not a high school athlete, but was pursued by schools because I was an honor student.  My parents did not try to influence my decision, even when I considered schools other than Clemson (my Dad graduated from Clemson College in 1940).

I can't imagine why Robert's mom would want him to go to Ole Miss other than to follow his brother.  It most certainly cannot be because she thinks he has a better chance to go on to the NFL from that school.  Frankly, Ole Miss has a horrible program and does not have many prospects of getting better.  They will likely finish the season at 5-7.  On the other hand, Clemson is poised to do well in the next few seasons.

I guess this situation is among those things that make you go "Hmmmmmm".

It's amazing what a little money can do in this world.

If Daniel is going to Mis. St. this weekend & Ole Mis. the weekend after that then he is no longer going to visit Clemson either weekend as he had stated - right? any word of if he does plan to visit Tiger Town in the future at all?

I have no idea what Daniel is thinking. He is from a different region of the country and has no ties to these Southern schools. This one will go down to the wire.

I don't want to look past the N.C. State game, but how do you think our defense will fare against South Carolina's read option this year, as opposed to last year when Conner Shaw made us look like an FCS Team?

I think Brent Venables is an advantage. Clemson has done much better against the zone read this season compared to last year. Also the Gamecock offensive line has not blocked as well this season. At this point the passing game would be more of a worry.

Have you heard any news from the Adams visit this past weekend?  Thanks.

My sources indicate the visit went very well. Adams never says much in his statements to the media but I think the staff feels like they are in this one to stay. This is a big story to follow in the next two months but we won't know anything until late January.

Lowcountry Tiger fan here who is more than pleased with the season so far.  What are your thoughts on Adam Humphries seldom calling for a fair catch on punt returns?  I know he’s very sure-handed, which is why he’s back there, but I am concerned about him trying to return punts with defenders right in his face.  I can’t recall any long returns from him this year, and only one fumble in the MD game.  It just seems to me that the risk is not worth the reward, and that a fumble at the wrong time could be disastrous in the upcoming games.

You are right in saying the reason he is back there is because of his sure hands. He is not much of a threat to break the game open with a long return. But most teams are kicking it so high this season that it makes it difficult to return punts anyway. Like you, I wish he would fair catch the ball more often.

Mickey, very much enjoy your blogs on the Tigers and they give me good insights into the program.  I read your blog today and could not agree with you more.  NC State is a trap game and the players have to ignore the hype.  This is a different 9-1 team and we have the coaches to remind them.  The Chickens will give us a game, but thanks the OBC (ole Ball Coach) we have enough fodder to motivate the team, certainly the coaches.

I wanted to ask about a BCS slot, provided we take care of business for the next 14 days, as Chad says.  I am not sure we are ready for the BCS.  What, how can that be???  The defense is the concern and while they have improved, mainly due to Spencer Suey, I think this defense is suspect and have not seen anything to show me different.  We have not played a BCS level team, except for FSU, so the level of improvement has me skeptical.  This week and next will show if they have improved.  I think the downside of getting blown out in a BCS game is much greater than going to the Peach Bowl and winning there.  We get embarrassed on national TV, it we are back where we started this year.  I would like your opinion on whether we are BCS caliber or should we wait another year when I think we will be at that level?

Clemson may not be ready for a BCS appearance but what other schools are? Someone has to go. Clemson would have little to lose in a matchup against Alabama in the Sugar Bowl. It would be a no lose situation. Anything less than 70 points is a victory. The publicity of a Sugar Bowl would be priceless.

It seems that BV is always wearing purple on the sidelines instead of orange. Is that because he doesn't want to wear OSU colors or does it have something to do with players being able to find him easily for play calls?

He jokes about the Oklahoma State thing but I think he does that so the defense can recognize him on the sidelines. He is able to signal in the defense to players that recognize the purple.