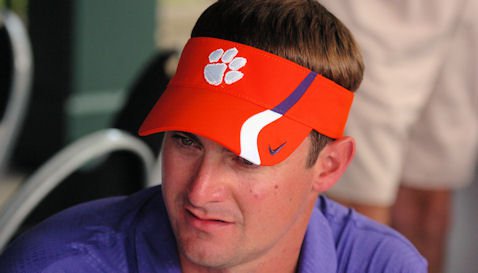 It's hard to believe how much recruiting has changed in the last few years.  The days of crucial official visits in January and the importance of having the last official visit has given way to the early offers and commitments.

As we stand in the middle of June, Clemson's Class of 2016 is all but finished.  The staff has secured a class that is currently ranked second in the country according to rivals.com.  The Tigers class is second to only Alabama at this point.

The staff has 18 known public commitments.  That list includes one five star, seven four stars and ten three stars.  The staff is currently waiting on only a handful of prospects to round out the class with maybe three or four more scholarships available.

On the offensive side of the ball Clemson is finished at quarterback and tight end.  Coaches would like to take one athlete who could possibly play wide out or wide receiver, and Tampa's Ray Ray McCloud is the primary target there.  McCloud is a four star athlete that is high on Clemson, with Florida perhaps the main competition at this stage.

The Tigers may take one more offensive lineman to compliment the four current commitments.  Zack Bailey is a four-star prospect from Summerville, SC that should choose between South Carolina and Clemson.

Clemson has two defensive end commitments and could take one more.  Austin Bryant is a four star from Thomasville, GA has Clemson, FSU and LSU atop his list.

Albert Huggins may be the best player in the South Carolina.  The four star from Orangeburg, SC is high on Clemson and Georgia heading into the second half of his summer.  Huggins is a defensive end/defensive tackle prospect.

The Tigers haven't taken many JUCO prospects in recent years but have interest in DJ Jones, who is a four star originally from Powdersville, SC.  Tennessee leads Alabama and Clemson at this point.

There are a few others on the board but there are very few scholarships available and the above five prospects are five of the top players still on the wish list.  It will be interesting to see how the timing works out with their decisions and how much room is available when those decisions are made.

The next big event comes in early July when the staff will entertain a bunch of top prospects at the annual summer cookout for prospects and their families.

At this rate this class could be wrapped up or very close to being wrapped up by the time the team reports back for August camp.

My how things have changed in this recruiting industry.