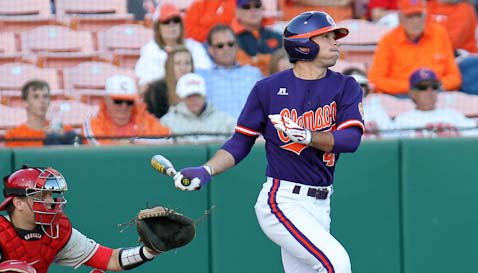 I was saddened this weekend by what I saw in all three games at Doug Kingsmore Stadium.

The baseball was bad at times but the bigger concern was the lack of energy in the facility.  In fact, I can remember only a few occasions where it was like what I saw this weekend.

I grew up on Tiger baseball that featured teams struggling to win at Clemson.  There was a huge home field advantage and teams dreaded coming here.  That was not the case again this weekend.  The place was as quiet as I have ever heard it this weekend.

I saw a lot of indifference this weekend at the ballpark.

There were some positives this weekend.  Saturday night Daniel Gossett

But there was more bad than good.  Clemson was outscored 18-6 over the weekend.  The Tigers were outhit 38-23.

Sunday it took seven pitchers to get through the game.  In that game we saw a pitcher that didn't cover first base on a ball hit to first.  We saw infielders hold the ball instead of throwing to the proper base.  We saw the catcher throw the ball into centerfield when trying to throw out a base runner because no one covered second base.  We saw 24 Miami base runners.  We also saw Miami call off the dogs.

Once again we saw a team that pitched better and played much better defense than the Tigers.  We saw fundamental mistakes at the plate, on the mound, in the field and on the base paths.

But the biggest concern I have is the energy.  The players’ body language told a big story and you could tell there was a lack of confidence.

The fans see it and it has made its way up into the stands.  The conversations in the ball park between pitches and between innings are not positive ones.  Hope is not found in many fans.

A few years ago Jack Leggett

Jack Leggett
Baseball Head Coach
View Full Profile got into it with a fan who yelled at him about his ball club from the stands.  This time I didn't hear anyone saying the same thing because this weekend I didn't hear anything.  Indifference is silent.