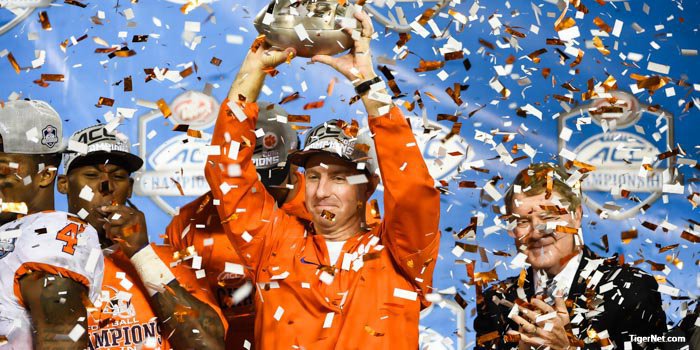 This one looked very familiar. We have seen this before, but I won't ever get tired of watching.

In the end, Deshaun Watson wasn't having any of it. His Heisman candidacy advanced with another ACC title and a bid into the College Football Playoff. Watson was 23 of 34 for 288 yards with three touchdowns. On the ground, he led the Tigers with 85 yards and two touchdowns on 17 carries.

Clemson was the better team from the opening kick but give Tech credit. They were a scrappy bunch and first-year coach Justin Fuente came up with some terrific wrinkles. In the end, Clemson was the superior talent and the team with the guts to make the defining plays.

There were other stars besides Watson. First, the Clemson crowd was fantastic. The official attendance was 50,628. If that was the number, there had to be 30,000-35,000 Tiger fans. It wasn't easy getting to Orlando but give the Tiger fans credit for prioritizing the ACC title game and not wait on the College Football Playoff.

Clemson was balanced with 288 through the air and 182 on the ground. The Tigers had 11 more first downs and 84 more yards than Tech. At times it looked as if Clemson was close to blowing out Virginia Tech.

The defense played well for several long stretches. They had three three and outs in the second and third quarters that were key to the victory. They sacked Jerod Evans four times (Lawrence 2, Ferrell and Watkins). The Tigers held Tech to 102 yards rushing. They held Bucky Hodges's to just one catch. However, Tech's trick plays, big plays and never say attitude kept the outcome in doubt until the final interception with 1:11 remaining.

It was Clemson's 22 conference title, 16th ACC title, and Dabo's third ACC championship. It also means back-to-back ACC titles for the first time since 1987-88 and back-to-back appearances in the College Football Playoff.

After the game, Watson said this one was more special than last year. This season this team had a target on its back the entire year, and they responded with Another Clemson Championship!