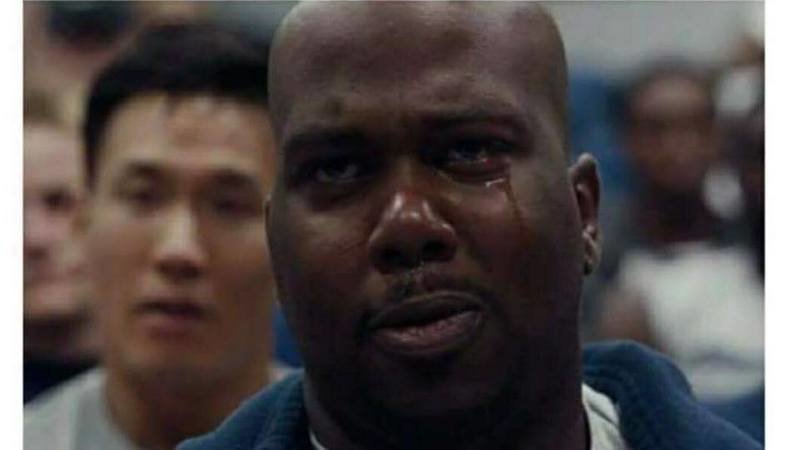 McKissic in a scene in the movie "Paterno." (Photo courtesy of Jock McKissic)

At the age of six Jock McKissic told his grandmother that he wanted to be an actor, but when he got older his talents took him to football fields across the country. Once his playing days were over, he once again began to think about acting and his two careers intersected recently when the former Clemson defensive lineman landed a role in the soon-to-be-released movie Paterno.

McKissic played for the Tigers from 2005-2008, earning 68 tackles and 2.5 sacks in his four-year career. McKissic became a star at Alabama’s Opelika High School, especially on the defensive line. He earned offers from Illinois, Louisville, NC State, Ole Miss, Mississippi State and Clemson among others, eventually landing in Clemson.

After Clemson, injuries derailed his NFL dreams, even though he did play in the Arena League. He was working out for a CFL team when he met Mark Ellis—the older brother of former South Carolina quarterback and now broadcaster, Todd Ellis—who runs Game Changing Films in Atlanta.

“After I left Clemson I played in the Arena League and was working out for Saskatchewan. Once I left Saskatchewan I started training in Atlanta and I met Mark Ellis,” McKissic told TigerNet. “He is a sports coordinator in the business, and if there has been a movie done about sports he has been involved, like The Waterboy, Any Given Sunday, Remember the Titans, and things like that. He asked me to come out for this show called Necessary Roughness and help them with some plays.

“I went out and did that and while I was there I did a couple of scenes that didn’t involve football. The director took note of me and thought I had what it takes to be an actor and they asked me if I had ever thought about being an actor. I told them yes, since age six I’ve wanted to be an actor. My grandmother would watch Oprah every single day, and she was interviewing an actor and they showed a couple of clips and I told her that is what I wanted to do. My grandmother told me there weren’t a lot of actors from Alabama, and I told her I would be the first one.”

After his role in Necessary Roughness, McKissic began to once again dream about acting. He researched independent auditions and started acting class. He got an acting coach and got his feet wet in a few indy films, often writing own material.

“My size might get me typecast, so I did short film and web series,” he said. “Two years ago, my current agent saw a short film and she wanted to represent me. They are the biggest in this part of the country, and now the train has been rolling. I am blessed to be a part of some big projects. I just got a place in Los Angeles and now I move back and forth between Atlanta and Los Angeles.”

McKissic continued to work and even earned a scene with Oprah, whose show he was watching all those years ago. He was a body double for Shaquille O’Neal in the movie Blended and struck up a friendship with Adam Sandler.

“Shaq was one of my heroes, so that was an honor to do a movie with him,” McKissic said. “I got to know Adam and it turned out he is a Clemson fan. I wanted to get him to a Clemson game a few years ago, and I still want to do that.”

When word reached Ellis that a movie was in the works about the life of legendary Penn St. head coach Joe Paterno, he reached out to McKissic.

“He reached out to me and said they were getting ready to do an Al Pacino film about Joe Paterno,” McKissic said. “He had been talking to writers and directors and they wanted guys who can act and play football. Me and the casting director went back and forth and about an hour after they saw my tape they booked my role.”

McKissic plays the role of “Tyler” in the film.

“Tyler is defensive captain on the team. Tyler was a guy from the South who probably wouldn’t have gone to Penn St if Joe Paterno wasn’t there,” McKissic said. “He went because of Joe Pa, and because of the legacy and scandal, he took it hard. I had three scenes with Al Pacino (who plays Paterno), and he reminded me so much of Joe Pa it was surreal. I had a chance to watch him and see him work, and for a young actor like me to see an Oscar winner and one of my favorite actors at work was great. The scene that made the trailer was where Paterno was speaking to the team and my character broke down crying within that scene. That was huge for me.”

“My ultimate goal is to start producing my own films and create opportunities for other people,” he said. “Being an athlete carries over to every facet of life, and being an athlete I’ve always been a leader. In this industry, I want to do the same thing.”