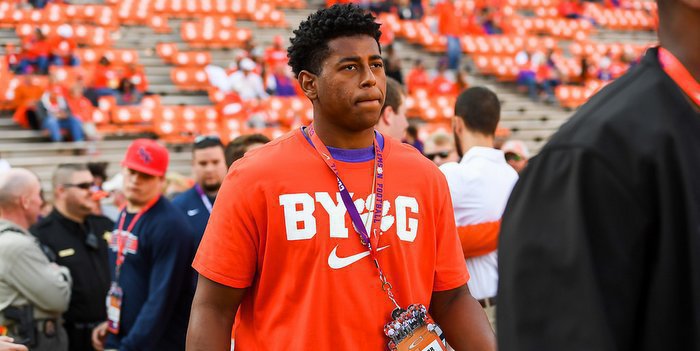 Upshaw hopes to make a decision before his senior season

The 3-star out of Bradenton, FL (Braden River) is the brother of current walk-on Clemson linebacker Regan Upshaw, Jr. and the son of former NFL defensive lineman Regan Upshaw, the 12th overall pick in the 1996 NFL Draft by the Tampa Buccaneers.

The Clemson offer was a nice surprise.

“I want to say it was. I didn't think I would be offered a scholarship that day,” Upshaw told TigerNet. “I thought they might come down and watch my practice and then invite me to their camp, but as far as a full scholarship I wasn't expecting that.”

Venables and Elliott extended the offer later that night.

“They called me over the phone and Coach Venables explained to me the scenario of the offer. First, he wanted to let me know that I have a full scholarship to play at Clemson,” Upshaw said. “He was telling me that they are only taking 10 people in the class of 2018. They want to get me into the 2018 class, but that spot depends on if a junior leaves for the draft, which enables more spots on the team. It will most likely work out. I would gray shirt if that doesn't happen.”

Upshaw hopes to make a decision before his senior season "

“By far, they're one of my favorite offers. When I do release my top schools, they will 100-percent be there,” he said. “A lot of people already know that. Along with the fact that my brother already plays there, it's definitely special.

“To be honest, I can't even name my top schools yet. This spring, I didn't visit any places so I want to say that I haven't decided that. I got a lot of offers this spring so this summer is going to be very important in narrowing down my top schools. I don't want to name any top schools until I've visited them.”

Upshaw said there are several things that stand out about Clemson.

Upshaw hasn’t had a chance to see the new facilities at Clemson, but hopes he can take a look this summer.

“I've gotten some videos from my brother, but I haven't gotten a chance to see them. I know that it's crazy,” he said. “I'll probably be on campus this summer. I haven't decided about camp. I'm not saying no, but I just haven't decided. I think I want to make my decision probably before my senior season, that's really when I want to make my decision, so I want to get up there before then.”