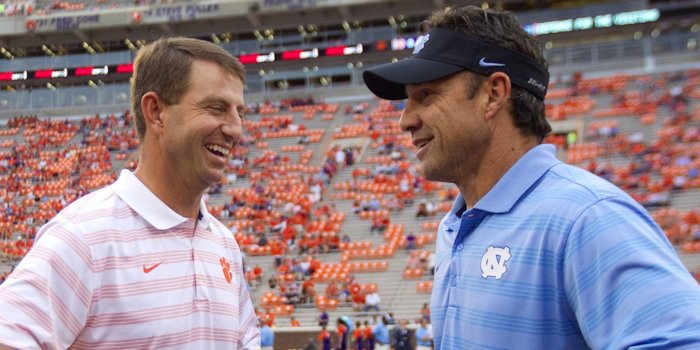 If North Carolina hopes to stop Clemson’s offense Saturday night, it will start with slowing down dynamic sophomore quarterback Deshaun Watson, something they didn’t do last season.

The Tigers and Tar Heels played in Death Valley in late September last season in Watson’s first-ever collegiate start. Watson torched the Heels that day, completing 27 of 36 passes for 435 yards, six scores and one interception. The six touchdown passes set a Clemson record.

Watson is having a stellar year in 2015 and is a finalist for every major award in the country and will likely be one of the finalists for the trip to New York for the Heisman Trophy presentation.

Watson, who has led the Tigers to a 12-0 record, No. 1 ranking and spot in the ACC championship game Saturday, leads all conference players with 331.6 total yards per game and has scored 36 total touchdowns. He tops the league in passing yardage (3,223), touchdown passes (27) and passing efficiency rating (161.9) and Wednesday was named the ACC Player of the Year.

“Oh, that's a good question. It's an answer that a lot of people haven't found the answer for this year,” Rashad said earlier this week. “In our preparation, we're going to have to find a way to do exactly that on Monday when we're just getting into the film, really, I don't think we have an answer for it yet. But hopefully by Saturday we can find a way to get it done.”

Rashad said the Heels not only have to stop the pass but stop Watson’s running ability.

“Yeah, that's going to be a huge part of the game. Obviously, he can throw the ball and he runs it really well too,” he said. “So you have to be really disciplined in everything you do. If you're in coverage, you have to be very disciplined in covering your guy and keeping your eyes on your guy. Because that's your guy, and if you're not in coverage, he can throw it and gas you for a pass. But if you're a pass-rusher, and your responsibility is keeping an eye on him, you have to make sure you do that as well because when everybody's covered and nobody is keeping an eye on him, he will take off and run and he can get you that way too.”

However, Watson isn’t the only playmaker on the field.

“Those guys have play makers all over the field. A lot of people get caught up in just, you know, when you watch the game obviously they have Deshaun Watson, and he's a great football player,” Rashad said. “But people playing against the team won't forget this, but people just watching on the outside looking in will forget that they have play makers all over the field, and that's what makes it so hard to stop their offense.

“If it was just a quarterback, you can scheme that and find a way to stop it. But when you've got a great quarterback and a lot of great ballplayers around him, it's tough. Because those guys do a great job of getting the ball in the play makers' hands and they've got them all over the field and taking care of the football, too.”

“You know, I guess Deshaun, comparing him to Marquise, he's a guy that he can make every throw there is. He looks like he's very poised for a young guy, for a sophomore. Nothing rattles him. He runs the ball extremely well. You know, and I would say 'Quise can do all of those things, too. Probably the only difference, 'Quise may be a little thicker, and 'Quise is older. I don't know, maybe he just has more -- maybe more experience, that's all.”

Fedora said the Heels will have to have someone spy on Watson at all times.

Fedora was asked about Watson’s success against North Carolina last season and he answered that the Heels are a different team this time around.