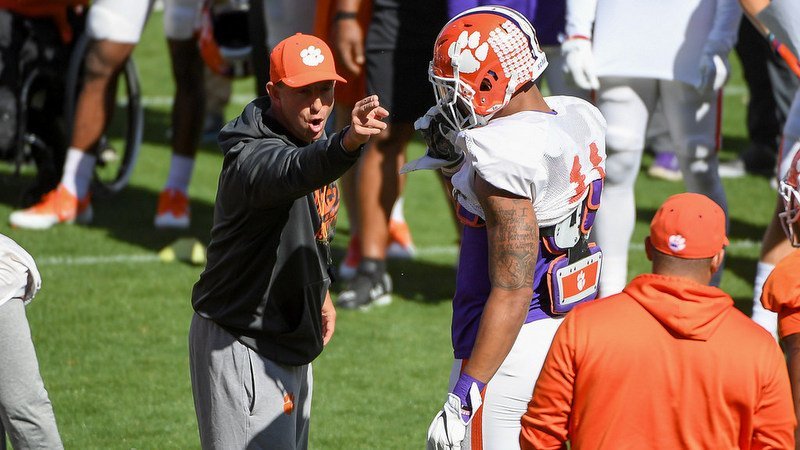 Clemson head coach Dabo Swinney and the Tigers might start the season at No. 1

The start of football season is still months away, but that doesn’t stop college football fans from thinking ahead and I’m no exception.

As we’ve driven to and fro over the past month or so, Nikki and I have talked about what we think will happen and what we think could happen. That leads to today’s predictions, where we’ll talk about things that are well within the realm of possibility and others that might be a little bit out there.

This will be the first of a few:

Clemson will go undefeated in the regular season: Right, this one isn’t a shocker. The schedule sets up perfectly and there is talent across the board. The two toughest games at this point are at Texas A&M and at Florida St. Navigate those successfully and it sets up another run to the College Football Playoff.

South Carolina will beat Georgia in week two: I am not bullish on the SEC East. It will take time for Florida and Tennessee to turn their fortunes around, and Kentucky doesn’t scare anyone. I had a former player watch Georgia’s spring game last week and he told me that the Bulldogs might struggle to overcome the major loss of talent. I think the Bulldogs go down in Willliams-Brice.

Florida St. will be better than people think: There was no doubting that FSU had a lot of talent last season and in the years since the 2013 national title, but things were toxic (an understatement) under Jimbo Fisher. Things just seemed off, and new head coach Willie Taggart has them believing. An improved running game should help, but it will depend on the porous offensive line and the play at QB.

As for Jimbo, six wins might be what he gets in his first season in Aggieland: There are a lot of expectations in College Station – the Aggies are trying to outspend everyone in an effort to win. The results won’t be seen this season.

Clemson and Alabama will face off for a fourth consecutive year: Alabama is once again loaded and the rest of the SEC West doesn’t impress me, at least not from a national perspective. I talked to a College Football Playoff rep the other day, and he said they are already expecting the Tigers and Tide to play yet again.

Michigan will beat Ohio State: The beginning of the Jim Harbaugh era hasn’t been what Michigan fans had hoped and the Maize and Blue faithful are beginning to get a little restless. However, for the first time under Harbaugh, the Wolverines have a quarterback. IF the NCAA grants Shea Patterson – the Ole Miss transfer – his waiver, Michigan will beat Ohio State for first time in seven tries.

The Aggie faithful will be restless after 2018: Texas A&M gave former Florida State head coach Jimbo Fisher a 10-year, $75 million contract, and at the end of 2018, Aggie fans will be left wondering why. A&M loses some really nice offensive pieces and it appears that Fisher has decided to play ‘SEC football’ – line up with a fullback and run it down your throat. That’s great but it won’t work against the big boys of the SEC West. The Aggies go 6-6 in Fisher’s first year, barely making a bowl game.

Arizona State will win the Pac-12 South: Southern Cal will be breaking in a new quarterback and the rest of the Pac-12 South is a jumbled mess, giving Arizona State its best chance at a division title. In 2017, ASU ranked third nationally in passing yards allowed and the Sun Devils return six of the front seven on that defense. They also return Taylor Kelly at quarterback after a 2017 season that saw the offense average 38 points a game.

South Carolina will lose to Kentucky for the 5th year in a row: Jake Bentley will carry the team and the Gamecocks will lead will 3/4 of the game, Kentucky will come back in the fourth to bring the score to lead 28-21. In the last four minutes of the game Bentley will hand the ball off to Deebo Samuel who will run it in for a touchdown. Parker White will miss the kick. Game will end Kentucky 28, USC 27. South Carolina will have to fear the thumb twice this season.

Mississippi State will beat Auburn: Nick Fitzgerald will simply out-throw Jarrett Stidham. Nick Gibson and Alec Murphy will be crucial in the running game. Reggie Todd and Fitzgerald will connect on a long pass to put the bulldogs in a 35-21 lead.

Texas will beat Oklahoma in the Red River Rivalry 21-14: Collin Johnson and Reggie Hemphill-Mapps will be key receivers. Kyler Murray will start at quarterback for Oklahoma but won’t make many connections. Marquise Overton will be the only factor that keeps Texas at 21. Texas defensive end Chris Nelson will have two sacks on Murray.