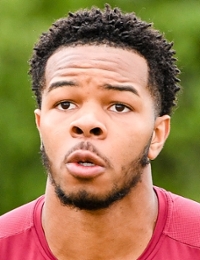 Linebacker
B I O
Rated as the No. 7 overall player in the nation by ESPN.com, including ranks as the nation’s No. 1 linebacker and the top player in Pennsylvania … ranked No. 30 by 247Sports, including being listed as the country’s top inside linebacker and the second-best player in Pennsylvania … ranked No. 106 by Rivals.com … five-star prospect according to ESPN.com … Clemson’s highest-rated player in the 2021 class by ESPN.com and its second-highest by 247Sports … invited to play in both the Under Armour All-America Game and the All-American Bowl … helped lead St. Joseph’s to a No. 3 national ranking according to USA Today … helped team win two straight 6A state championships, including 2020, when the team won its championship game, 62-13 … missed nine games as a junior with a broken arm … wore No. 54 in high school, the same number as his father, Jeremiah Trotter, Sr., a four-time Pro Bowler who played 12 NFL seasons for the Eagles, Redskins and Buccaneers from 1998-2009 … plans to enroll at Clemson in January 2021… Committed to Clemson on Sept. 7, 2019 … recruited by Mike Reed and Brent Venables … Trotter Jr. played for Tim Roken at St. Joseph’s Prep … born Dec. 24, 2002.