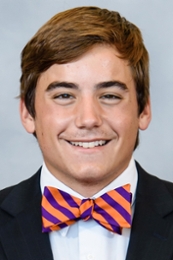 Safety
B I O
Original walk-on who entered 2020 having played six career games.


2018: Played in one game, making his debut on special teams vs. Louisville.