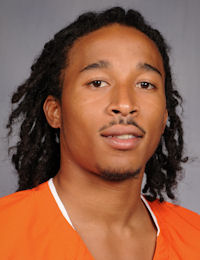 Wide Receiver
B I O
Overview: Won Hustle Award for the offense in 2009 as voted on by the Clemson coaches...should join Ben Ramsey as only original walk-on in this class to earn four letters...one of eight original walk-ons now on scholarship on the Clemson roster...has played in 36 of the 40 games over the last three years with four starts...averaged 33 snaps per game in 2009 and 16 plays per game over his career...had career-high five catches against Virginia Tech in 2007, most ever for a Clemson walk-on receiver...has 21 career receptions, second among active Tiger receivers...won Strength Training Award for wide receivers for the spring practice of 2010...eighth on the team in the power index with a 6.59 figure...sixth on the team in the vertical leap with a 36.5 inch figure...one of three active players who already has his undergraduate degree...named to Academic Honor Roll for 2010 spring semester.

2009: Led the Tiger wide receivers in knockdown blocks, he had nine in the win over Boston College, high figure for a Clemson wideout in 2009...had 11 catches for 124 yards, tied for fifth-most on the team...had at least one catch in eight straight games that he played in at midseason, but did not have a catch in the last four games...had 2-18 against Georgia Tech when he started and played career-high 68 snaps...had 2-26 in the win over Miami (FL) and 2-16 in the win over Wake Forest...missed the Coastal Carolina game due to illness...had nine of his 11 catches in the first seven games of the year...third among wide receivers in catches...started against Georgia Tech (regular season), TCU, Maryland and in the ACC Championship game against Georgia Tech...played 14 snaps as a reserve against Kentucky in the Music City Bowl.

2008: Had three receptions for 18 yards in the season-opener against #24 Alabama after Jacoby Ford was injured...did not catch a pass after that, as he was bothered by injury most of the year; he missed three games (The Citadel, N.C. State, S.C. State) with the injury...played special teams in each of the last nine games...played 44 snaps.

2007: Had seven receptions for 54 yards...had five receptions for 44 yards against #14 Virginia Tech, the most catches by a Tiger walk-on in history...had a catch at South Carolina and one against Louisiana-Monroe...played 109 snaps, more than any other Tiger walk-on...had 16.5 knockdown blocks...had a season-high six knockdown blocks against Central Michigan...had three knockdowns against Louisiana-Monroe...first caught everyone's eyes when he had four catches for 54 yards to lead all receivers in an August scrimmage.

Before Clemson: Wide receiver, free safety, and returned punts at Cheraw High School, the same high school that produced former Tiger All-America punter Dale Hatcher...totaled 10 touchdowns and 26 receptions for 489 yards as a senior...had 48 tackles, three recovered fumbles, and three interceptions to help Cheraw High to a 12-3 record and its first Lowerstate title in 11 years...made the South Carolina High School Sports Report AA All-State team and was all-region as a junior...member of Cheraw High's state championship baseball team as a junior...born Jul. 25, 1987...graduated in May, 2010 with a degree in history.