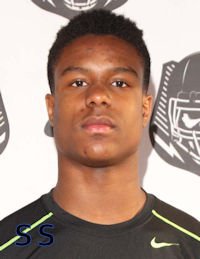 Defensive Back
B I O
A National top 125 overall signee by all three major services…ranked No. 71 in the nation by 247 Sports…they also list him as the No. 11 overall player in Georgia and the 12th best cornerback…Rivals.com lists McMichael as the 85th best overall player in the nation, the 12th best player in Georgia and the fourth best cornerback in the nation…ESPN.com ranks him No. 113 overall, the 11th best athlete and the 18th best player in Georgia…played running back and cornerback at the Greater Atlanta Christian School… will play in US Army All-American game in San Antonio on Jan. 6…as a running back in 2017 scored 24 touchdowns and had 1,483 yards on 128 carries, a 11.6 average…… had 24 total touchdowns in 2017, all rushing…had a streak of eight straight games with multiple touchdowns during the 2017 season.… had at least 100 yards in each of his last five games and eight of the 14 games in 2017…had 14-154 vs. Jenkins High…finished senior year with 1,639 all purpose yards…named to the Atlanta Constitution’s Super 11 team for 2017…had 19 solo tackles in 14 games his senior year…helped team to a 12-2 record and the Final Four of the state tournament….as a junior had 1,493 rushing yards and averaged nine yards per carry…scored 16 touchdowns rushing…had career high 21 for 196 yards rushing vs. Lovett in season opener of 2016…had five 100-yard games for the season.…finished 2016 with 1,946 all-purpose yards and 18 total touchdowns…first-team all-state as a junior in 2016…helped team to a 13-2 record and the state championship game in 2016…competed at Nike’s The Opening …played his high school football for Tim Hardy….played at North View High School his first two years…committed to Clemson on 06/23/2017….recruited by Tony Elliott, Mickey Conn and Mike Reed.