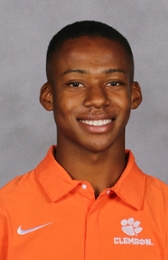 Defender
B I O
Before Clemson: From right here in South Carolina, Watson was named the South Carolina United ECNL Player of the Year for 2020-21. His efforts earned him a spot on the ECNL All-conference team as well as the 2011 All-state team. Watson had the chance to compete in Germany in the Keramik Cup Tournament in 2019 and 2020.
Noonan on Watson… “A diamond in the rough who has been cut but not polished. He attended our camp the last couple of years and impressed with his assertive & aggressive defensive play. He is a model student-athlete that continues the tradition of the best in-state players having opportunities to play and contribute at Clemson and in the ACC.”