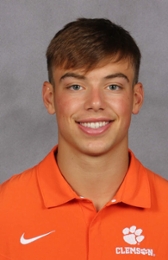 Midfielder
B I O
Before Clemson: Behrmann was a 2021 High School All-American, as well as an2021 ECNL National Champion. He led his team to the 2020 state championship as the 2020 North Carolina Private School Player of the Year. The Charlotte, N.C. native was a two-time All-State Selection.
Noonan on Behrmann… “Noah is a winner. He will always find a way to work towards improving himself but more importantly those around him. He is a consummate team player who knits the team together from the midfield. Noah’s Dad Chris played for the Tigers from 1993-96.”