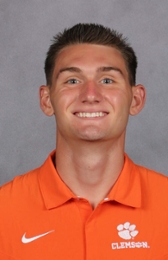 Goalkeeper
B I O
Before Clemson: As a member of the Connecticut ODP team in 2019, Hampton won the East Regional and was then selected to the East Regional ODP team. He was also the keeper on his high school’s conference championship team in 2019. A well-rounded athlete, Hampton won a state championship on his high school swimming team and was named an all-state swimmer.
Noonan on Hampton… “Aiden is one of the top GK prospects coming out of NE region. He has great parameters physically and an upside that should have him in the competitive rotation early in his career.”