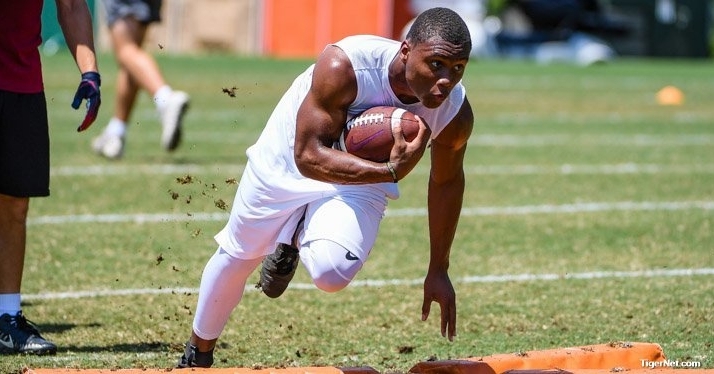 A running back from the Peach State with a familiar name added a Clemson offer this week.

Canton (Ga.) 2022 running back Keith Adams Jr. announced a grayshirt offer on Tuesday. He is the son of prolific former Clemson linebacker Keith Adams, who led the nation and set school records in both tackles (186) and tackles for loss (35) in 1999.

Adams Jr. is rated a 3-star prospect by Rivals. He has rushed for 879 yards and eight touchdowns this season, averaging 6.3 yards per carry. He has 2,183 yards and 21 TDs over his high school career so far, per Maxpreps.

"After a great conversation with Dabo Swinney I am blessed to receive a gray shirt offer from @ClemsonFB!" Adams posted on Twitter.

Adams has been in Clemson's camp before, including a stop in 2019.

“It was a great experience. I had a lot of fun and I learned a lot of new techniques that I never knew before. It was just a great experience,” Adams told TigerNet afterward, describing himself as "an all-around running back." “It's great to come back and see Clemson. But it's also been fun to see all of the other schools that are recruiting me, too. I am just enjoying the process.”

He said a Clemson offer would be "a dream come true."

“I know all about the history of the program and of course, my dad played there," he said.

A grayshirt would mean, if he committed, Adams would go on scholarship after the first football season of his signing class.