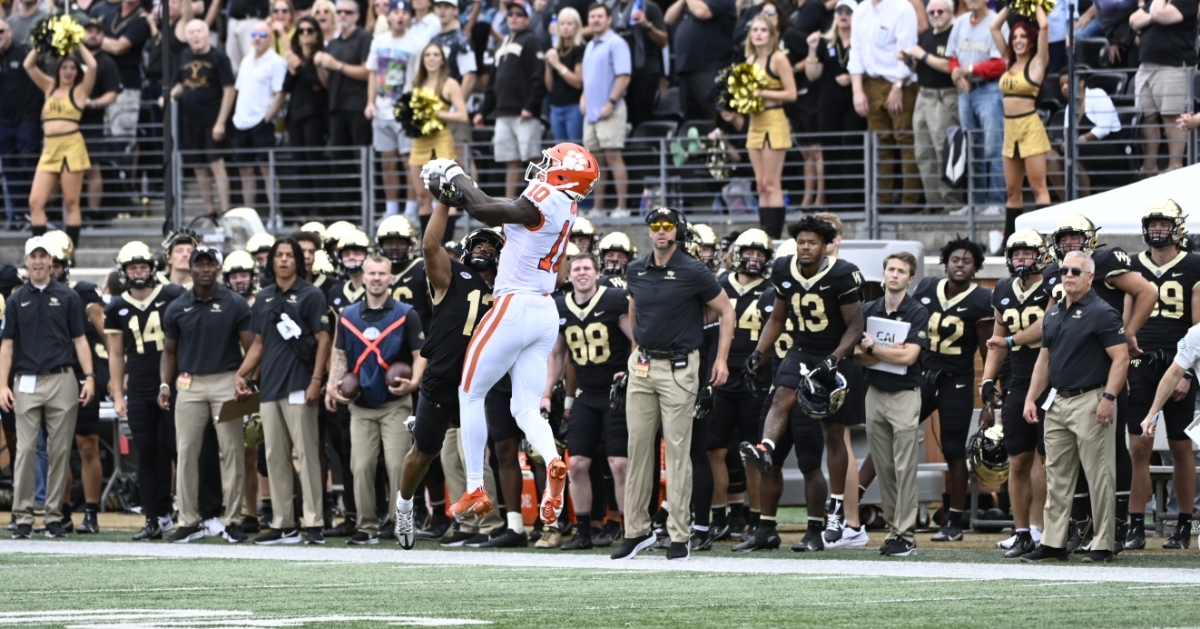 The Wake Forest bench reacts to a play late in the game.

WINSTON-SALEM, NC – Clemson head coach Dabo Swinney knows his team has plenty to work on, while Wake Forest head coach Dave Clawson has to deal with a hurting locker room.

Nate Wiggins broke up Sam Hartman's fourth-down pass in the end zone to help No. 5 Clemson hold off No. 21 Wake Forest 51-45 in double overtime on Saturday at Truist Field.

Clemson was called for five pass interference penalties for 75 and surrendered 337 yards and six touchdowns, yet still came away with the win thanks to an offense that never buckled.

“We’ll get this defense fixed,” Swinney said after the game. "But man, this offense … all the big plays, they never flinched. That’s what it’s all about. I’m just really proud of them. they grew up a little bit tonight.”

Wake Forest has lost 14 consecutive games in the series, and Saturday’s was the best during that span.

"It was just a great college football game. It was two really good teams going back and forth,” Clawson said. “Certainly, I want to give credit to Clemson, Dabo (Swinney) and his staff. His team was well prepared and they did a great job. I am also proud of our team. We battled and competed. Sometimes two good teams go at it and one team maybe makes one more play than the other team. That's what today came down to.”

“It was a great atmosphere, sold out. I really want to thank our students for how well they showed out and all of our fans over 32,000 people,” Clawson said. “It was just a great back and forth football game. We got off to a slow start. And then the second quarter. We got some confidence on offense. Then in the third quarter and fourth quarter, we really got into a rhythm. They did, too. Today neither team could really defend the deep ball. That's what it came down to at the end. They hit that one down the middle. We had the ball tipped and we missed a shot at the end. So again, it was a one-play game. They made that one more play than us.”

He then said that while his locker room is full of hurt, there is plenty of football left to play.

“So the locker room right now is hurting. That's a football team that has invested a lot and they care a lot and expected to win this game,” Clawson said. “But again, there's a lot of football left and you're not going to win the league with one game. You're not going to lose it with the game. Obviously, it's a league loss and they're one up on us, but there's a lot of football left and again. We have a pretty good football team and we'll be back."