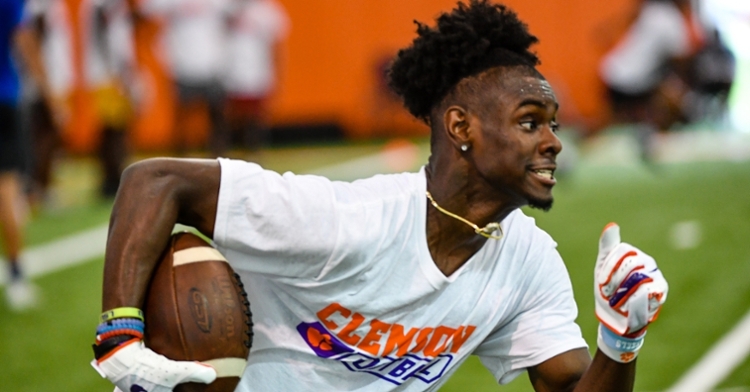 Greene was a standout in camp Thursday.

One of the top receivers in the nation camped at Clemson Thursday and walked away with a coveted offer after an impressive camp showing.

Andre Greene, Jr., is a 4-star prospect out of Richmond (VA) St. Christopher’s School. The 2022 standout shined during the afternoon session. He was, in my opinion, the most competitive receiver that wide receivers coach Tyler Grisham has had in camp so far. Greene ran polished routes and was very physical at the point of attack. At one point, Grisham acted in the role of a corner playing press-man and Greene easily shed Grisham to get open (as Grisham smiled).

Head coach Dabo Swinney stopped to take in Greene’s route running, and once the session was over, Swinney called Greene and his family over and made an offer with all of his staff looking on. Greene had previously told TigerNet he was looking for that Clemson offer.

“Having an offer from one of the top football programs in the country such a Clemson would definitely mean a lot,” Greene said. “The success they have had on and off the field is very impressive.”

Greene and his family were treated to a campus and stadium tour (by Grisham) Wednesday night when they arrived, then took another campus tour with a Clemson staffer Thursday morning. He worked out Thursday afternoon, where Swinney said he was more than impressed with Greene. The offer was extended with several current players present as well.

Greene told TigerNet he knew all about Clemson.

“When you ask what I know about Clemson and what stands out,” Greene said. “Do you mean other than having six undefeated seasons, five straight football playoff appearances, 25 conference championships, eight division titles, and over 250 NFL players?”

Greene has been to a couple of other places so far and has four officials set up with ones this summer to Georgia, North Carolina and Oregon and one in the fall to Notre Dame. After this summer, he should be able to narrow his list down further.

“With Coronavirus being with us for most of the year, I haven’t had a chance to visit and get to know schools like I would want to,” Greene said. “I’m not in a rush to make a decision and want to build those relationships to make sure we are both the right fit for each other.”

I asked his father, Andre Greene, Sr., if Clemson would be in line to get a visit in the fall.

“We are currently visiting Dre’s top schools and will sit down as a family to discuss the visits,” he said. “I will say that we were extremely impressed with what Clemson had to offer.”

The younger Greene said he lets his play speak for itself.

“I would say I’m a very well-rounded receiver that can do many different things. I’m physical, strong, tall, athletic, fast, run goods routes, have strong hands, and can jump high to get any ball that is near me,” Greene said. “If you give me too much space, I can catch short balls and get a lot of yards after the catch. I have a lot of different favorite wide receivers and try to take a pieces of their game and add it to my game. And one thing my coach always tells me is he loves that I block for our backs or other receivers.”

The state of Virginia did not play football in the fall and St. Christopher's had just a three-game season this spring. Greene caught 12 passes for 234 yards and two touchdowns in that trio of games.

After a great talk with coach Swinney at the end of camp, I am extremely excited to say that I have received an offer from Clemson University!! #GoTigers?? pic.twitter.com/bVCLQOxHuJ