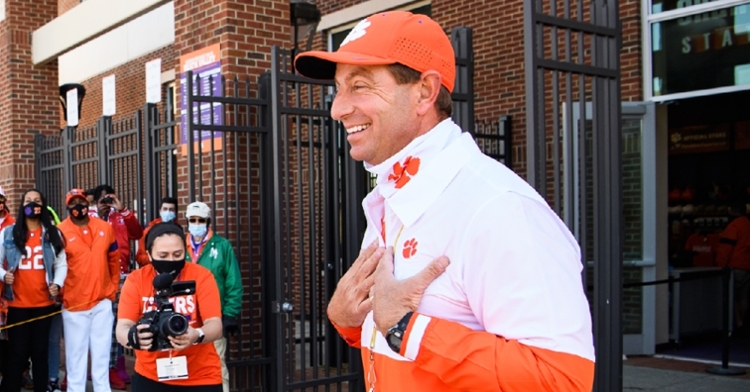 CLEMSON – On to the transformation phase of the 2021 season.

The White team scored two late touchdowns and came away with a 14-13 victory over the Orange Saturday during the Tigers’ annual spring game in Death Valley, and head coach Dabo Swinney was pleased with his team’s last act of spring practice.

"First of all, appreciate our fans showing up and giving our players the best possible environment we could have. Beautiful day. It was a great game, great spirit, a lot of enthusiasm,” Swinney said. “Had too many penalties on White that stalled them, but they overcame it. Defensively, a lot of good things, got some hands on the balls and a couple of turnovers.”

Swinney said this team is further along than the 2018 National Championship team.

"There's no doubt about that. The '18 team, you know those guys were with such a veteran group,” Swinney said “This will be the most veteran team we've had since that '18, you know, from a leadership standpoint. So I'm excited about that. Definitely ahead of where we were last year.

"It's not even close because, again, just so young in the offensive line, and we're still young, but we got more guys functionally, mentally ready to go compete and can play winning football for us. The same thing on defense. We're more mature up front, more guys that have been through the battles and got a few scars on them."

Several outstanding players missed the game, from linebacker James Skalski to wide receiver Frank Ladson to top secondary players like Mario Goodrich and Nolan Turner. So while Saturday was good from the standpoint of watching a lot of the younger players earn reps, it’s not even close to what this team will be in August.

"I'm excited about what we have a chance to put together especially when we get everybody back," Swinney said.

"A lot of good things this spring," Swinney said. "Now they've got four months to transform. Sept. 4, the lights come on. We've got a lot of work to do to be ready."

Wide receiver Ajou Ajou had six receptions for 102 yards and a touchdown in a breakout performance.

"He can make plays. He's a natural when it comes to attacking the ball,” Swinney said. “His confidence is at an all-time high. He's the best version of himself that we've seen. You saw things out there today that we've seen all spring from a confidence standpoint. He still makes mistakes and did that today. But here's what I love about him: He's playing full speed and he's not hesitating. He's a unique guy; he's very different from some of the other guys we have.

“He's an exciting young prospect and it was good to see him make some big plays today; that's going to be huge for his motivation going into summer to get him ready to really help this team. Again, because both of those teams today are going to come together as one team, it's going to be very competitive. It's going to come down who can perform consistently for us day in and day out, and he has a chance to do that."

Another receiver who impressed was veteran Joseph Ngata.

"He's still getting 100 percent. I don't think he's quite 100 percent. He's had a great spring,” Swinney said. “It's really just having a great summer and getting his body right where it needs to be and continuing to work on his rehab, prehab, and recovery and... just being available. That's it. He's going to make a million catches if he's healthy. That's the only thing that has held him back. Last year, he tried to play not anywhere near 100 percent and still did some things."

Swinney then said that quarterback DJ Uiagalelei needs to continue his growth over the summer.

"Really taking ownership of this offense. Go back through the installation, go back through the spring, go back over every mistake and situation,” Swinney said. “He really had a good spring. But we are talking about trying to be elite. He's a very good player obviously, but helping him become the best version of himself. Really asserting himself as a leader. He's got to lead the skills-and-drills. Studying, going though all the scouting reports, getting a head start on that. Getting his body in the best possible position he can be in. He is a true freshman-- his body is nowhere near mature as it's going to be as he continues to grind in the weight room and nutrition.

"We are putting a plan together for him — execute the plan. I can tell you this about D.J. — whatever we tell him, it's going to pale in comparison to what his expectations are for himself."