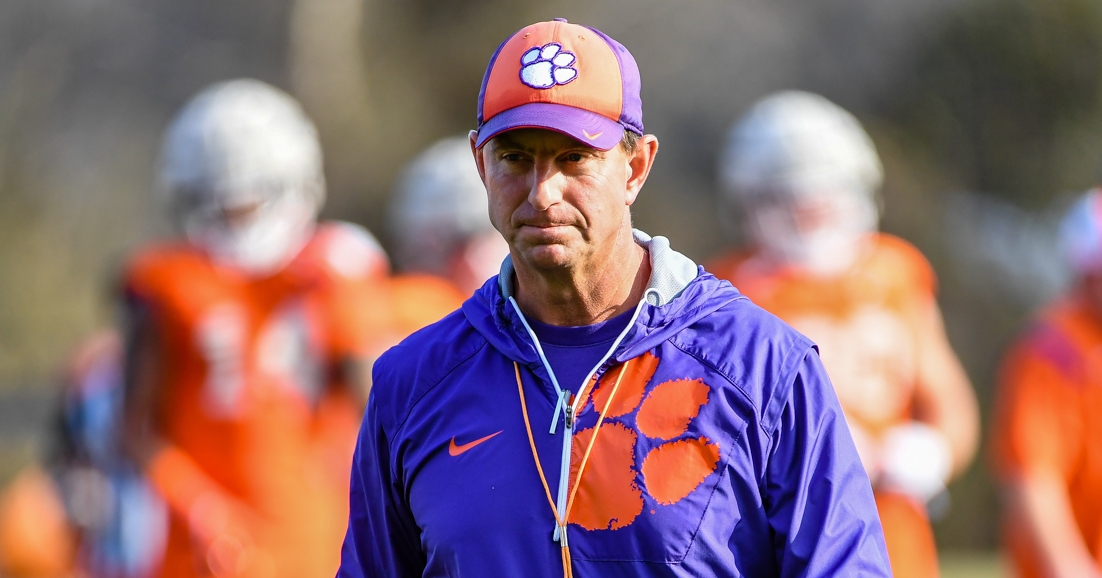 CLEMSON – Clemson head coach Dabo Swinney knows that other programs use negative recruiting tactics when going head-to-head with the Tigers for a recruit. He knows who those programs are, and he knows what they say. He also says that if they want the Tigers to fall off, they need to do a better job with their tactics.

Clemson started 4-3 last season, dealt with a rash of injuries that would have crippled most programs, and won a bowl game with somewhere around 50 scholarship players available. The Tigers’ opposition wants to think there are flaws in the armor and has hit the recruiting trail with a vengeance, promising recruits that Clemson’s glory days are over.

The Tigers hosted over 30 official visitors the first weekend in June and have reaped the benefits, hauling in 15 commitments since that weekend.

Swinney was asked about the negative recruiting during his press conference Friday.

“I think we’re recruiting pretty good,” Swinney said, “so they ain’t negative enough, I don’t guess. Again, it’s one of those things you don’t control. I mean, just be who you are…focus on being who you are, and be transparent. I think we’re doing alright recruiting.”

With the advent of the transfer portal and Name/Image/Likeness (NIL) deals, the recruiting landscape has changed drastically, making many schools alter their approach. Not Clemson.

In other words, Clemson won’t change to fit what a prospect wants. Instead, Swinney and the Tigers find the right prospects to fit what Clemson has to offer.

“Honestly, we just kept the main thing the main thing,” he said. “We don’t offer a lot of guys. I think we’re the fourth fewest offers in the country. We don’t try to be all things to all people. We believe in who we are and how we do things. I think the more chaotic it’s gotten, the better it’s been for us from a recruiting standpoint. Excited about where we are.”