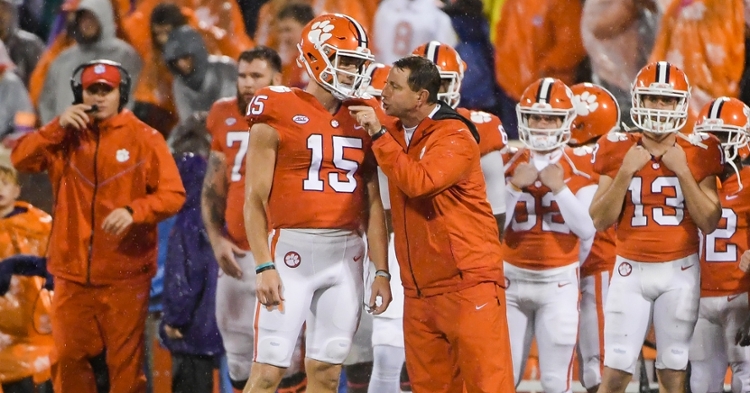 Johnson last played for the Tigers in the 2017 season.

Hunter Johnson is headed back to Clemson and will take a spot in the Tigers’ quarterback room for his sixth and final season of college football.

The former Northwestern quarterback entered the transfer portal late last week, but it was an earlier call to Clemson head coach Dabo Swinney about a spot as a graduate assistant that set the stage for Monday’s announcement.

Johnson, a former 5-star recruit out of Brownsburg (IN), began his collegiate career at Clemson, where he sat behind Kelly Bryant and was there for the first spring of the Trevor Lawrence. He announced his intent to transfer to Northwestern that June. He then sat out the 2018 season due to the NCAA transfer rules that were in place at that time.

In three seasons at Northwestern, he played in 11 games, completing 95-of-183 attempts for 856 yards and five touchdowns with eight interceptions.

Johnson told TigerNet about his decision and said he has his undergrad and Master’s from Northwestern and will be seeking his MBA back at Clemson.

“A big part of it is just because I know so many people down there,” Johnson told TigerNet. “I was to going to apply to their MBA program and was going to reach out to Coach Swinney about a potential GA (graduate assistant) spot. He kind of asked if I had my sixth year of eligibility and that is kind of how it all came down. I just kind of took some time to think about it a little bit because I hadn’t given much thought to it. He presented me with the opportunity and it worked out great.”

Johnson said he has spoken with Swinney, quarterbacks coach and offensive coordinator Brandon Streeter, and the quarterbacks currently on the Clemson roster.

“Honestly, in talking to Coach Swinney and Coach Streeter, and having the chance to talk to the quarterbacks as well, gave me a good feeling about this,” Johnson said. “The opportunity just came down to be an older guy in the QB room and help out any way I can. I want to help out DJ (Uiagalelei) and be able to help out all of those guys.”

Johnson said he made it clear that he knows the pecking order.

“Coach Swinney told me that going into the season DJ is the guy, and I wouldn’t want it any other way,” Johnson said. “I don’t want to create any drama, I just want to help out any way I can. This is a win for everybody. He thinks it would be great to have an older guy in the room. I also told the quarterbacks that I am coming in to help out and not take anybody’s spot.”

What does he hope to achieve with the move?

“I have a sixth year of eligibility and I get to go play football again,” Johnson said. “I have a chance to be a part of Clemson’s football team and help out those guys, and that is really exciting for me.”

Johnson is taking this semester off and won’t be on campus until the Summer I session, which starts May 17th.