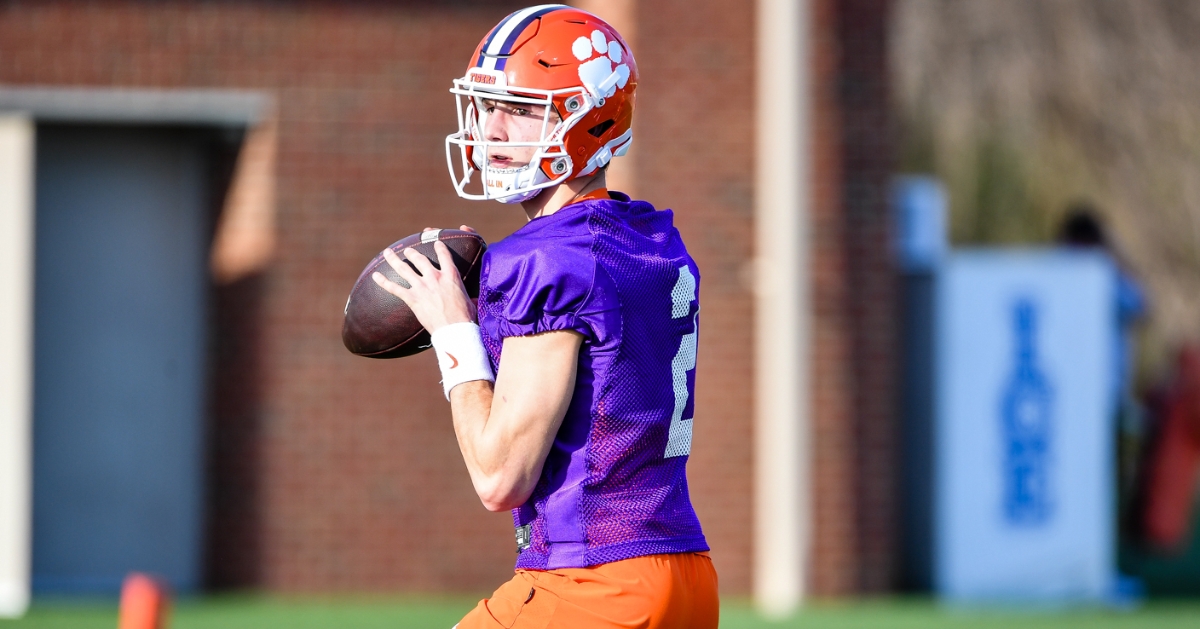 Klubnik is already a team leader.

CLEMSON – Spring practice is in full swing, and we have more team-related news and notes to pass along.

Members of the media were allowed to watch the early portion of Friday’s practice, and then we were shuttled back onto the practice field after the practice to wait on Xavier Thomas and DJ Uiagalelei for interviews.

Thomas was brought over and we spent 13 minutes talking to him about his outlook for this season, his choice of Thor as his Avengers character, his weight loss, and various other topics. Thomas was engaging, and had perhaps the best line of the night when he was asked if he had bulked up too much to play effectively. Thomas looked over at the reporter that asked the question and said, “I didn’t bulk up. I was fat.”

When the interview was over I asked him if, in true Thor style, he was going to dye his hair blonde at some point. He laughed and said, “That’s taking it a little too far.” When you’ve done a thousand interviews with players and coaches, it’s easy to tell when someone is being disingenuous or perhaps not telling the entire story. Thomas is, for the first time in a long time, at ease with everything. I think he’s in a great spot heading into the season.

It's also interesting to note that many media members have asked both Thomas and KJ Henry – both defensive ends – about the addition of Nick Eason to the coaching staff. Eason coaches the defensive tackles and I wonder sometimes if other media members know that Lemanski Hall is the ends coach, but both Thomas and Henry have given Eason rave reviews. 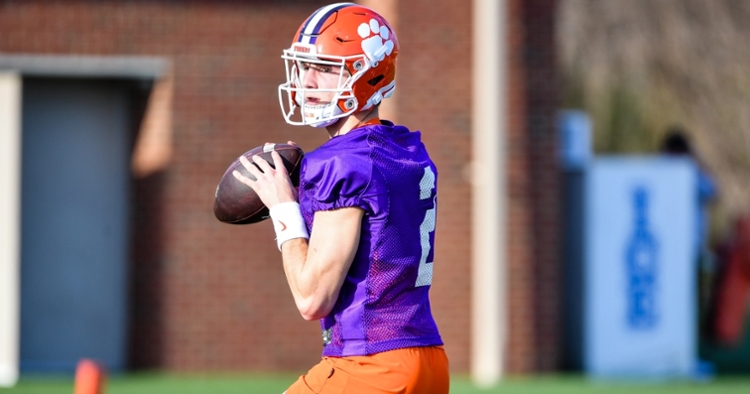 Klubnik is already a team leader. "

Eason is a far cry from former defensive tackles coach Todd Bates when it comes to demeanor, and it’s been eye-opening to stand and just listen and watch him coach. He doesn’t hold back, and at one point he told his group he was going to call Bates and ask what he had done to the group. He laughed, so he wasn’t serious, but as one person told me, Eason is exactly where he needs to be.

While we were waiting for Uiagalelei to come over for interviews – he was putting in extra work at the other end of the field – freshman quarterback Cade Klubnik moved to midfield and started throwing with receiver Drew Swinney. It wasn’t long before fellow freshman Adam Randall joined and then sophomore Dacari Collins made his way over. That led running back Dominique Thomas and offensive lineman Tristan Leigh to come over – Klubnik already leading by example – and those players worked on every route in the book, even Thomas running routes out of the backfield.

Leigh took over at center (and delivered some really nice snaps) and Klubnik threw every route in the book. Towards the end, Randall lined up inside, sped 20 yards downfield, cut two steps to the outside and then broke back inside for a post. The 55-yard pitch-and-catch was a thing of beauty, settling into Randall’s hands on time and on target.

I turned and looked at another media member and said that we might see that same play in a few years in a big-time game – Klubnik to Randall – and to remember the moment.

More on the quarterbacks – Klubnik and Uiagalelei staying after practice to throw has had a ripple effect. Hunter Helms and Billy Wiles also stayed to throw, and there were quarterbacks in every corner of the field. I’ve been told that Swinney has already taken quarterbacks off the field during practice, and there is a noticeable spirit of competition in the air. Helms, who knows the offense and is confident, was working on throws to he back corner of the end zone, and it’s obvious that this entire room is going to be better. Amazing what a little competition can do.

Circling back to Eason and being where he needs to be – I wrote last Friday that there is an air of “reset” around the program right now. One observer told me that the changes – while painful at the time – have been beneficial. I was told that sometimes things can get a little stale and there is a new feeling around practice. Heck, I even saw Swinney dancing to “Beat It” by Michael Jackson at one point Friday.

When people are dancing, things are going well. But I was also told that one player, who has since transferred out never stopped dancing. He danced during stretching, during practice, when people were looking, weren’t looking, and after practice. At some point, people have to take things serious, and when it’s time work, these guys are working. Maybe, just maybe, there has been addition by subtraction at some spots.