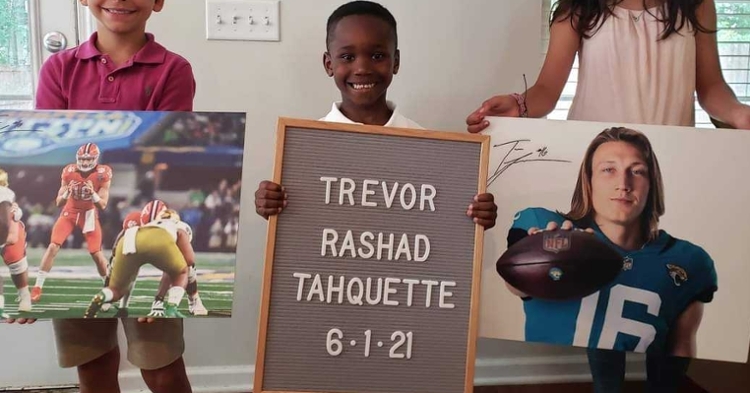 Six-year-old Trevor Tahquette of Charleston is like most little boys his age. He wakes up every morning full of energy, joy of life, and sweetness and he loves to try his parents’ patience by testing boundaries. He also loves to watch Clemson football games with his dad. Unlike most little boys his age, Trevor recently cemented his place in the world by finding his forever home and his forever first name, changing his first name to honor his favorite football player, and getting a new last name to honor the only true parents he’s ever known.

Brandon and Sherry Tahquette of Charleston have six kids, five of them coming to their home in their role as foster/adoptive parents, and they view their lives as a ministry to the fatherless. Five years ago, a brother-sister tandem entered their lives and would change those lives forever. The little boy, named Rashad, was suffering from PSTD due to some of the things he had had to endure in his home, and the little girl has also battled her own problems that have required round-the-clock care. Not that it mattered to the Tahquette family.

“This is the way it should be for foster kids. Christians in foster care should be reaching out and trying to help those that need the help,” Brandon Tahquette told TigerNet. “It's a ministry to the fatherless. But at the same time, we also want to be there to bridge the gap for people that just need some time to get their lives in order so they can get their kids back. When we realized that the bio parents couldn't take care of his little sister, that is when the wheels started to spin that we really wanted to adopt them and that our goal was to adopt.”

During the five years that both children have been in their lives, Rashad had to take what he called “visits” with his biological family, even staying for an extended period at one point.

“He really hated the visits. There was one time I took him to DSS for a visit and I had to pull him out of the car,” Tahquette said. “I had to pull my son out of the car and take him and leave him with somebody he didn't want to be with. That was the crushing part of it. I had to take my son, who loves me and loves our family, and just wants to be a part of our family, and I had to rip him away from that.”

Tahquette made sure a certain Clemson book made the trip with Trevor, however.

“It's been awhile since we've been to the games, but when the games come on, daddy is smoking wings in the backyard and we are watching the games,” he said. “I have been a huge Clemson fan since I can remember, and that will naturally rub off on them, In fact, before they went back with their bio parents for that period of time, every night we would read Night-Night, Little Tiger and that was something they had.”

The book didn’t make the return trip from one of the visits – another one was quickly bought – but both Brandon and Sherry knew that had to make sure this little boy, this little bundle of love and energy and so much potential, had a forever home. Their efforts came to fruition on June 1st, when Rashad became their child in every way that counts.

However, when the judge asked him what he wanted his name to be, little Rashad let everyone know that he wanted his new first name to be the same name as his favorite football player – former Clemson Tiger and current Jacksonville Jaguar quarterback Trevor Lawrence.

“We had no idea that he wanted to go by Trevor until the adoption the other day,” Tahquette said. “The judge asked, 'Do you want to go by Trevor or Rashad?' And he thought about it for a second, and he said, 'Trevor. Trevor.' We went to dinner and a few other people asked him and he said, 'Trevor, Trevor.' We thought he was going to say Trevor because he wanted to be like TLaw, but we would still call him Rashad because he had been Rashad for six years. And that's who I know him as. And he was like, 'No, I am Trevor. I am going to be Trevor.' He just wants a complete break from all of the other stuff from before.”

Clemson head coach Dabo Swinney’s brother Tracy heard about the name changed and immediately sent the newest Trevor two prints signed by his favorite player, and on adoption day, his mega-watt smile said all that needed to be said about his new lease on life. No more “visits.”

This made my day.. he’ll carry the name well! Thanks for being a fan - you’re a big reason why I love what I do. Thank you???? https://t.co/qRGEYGSqTQ