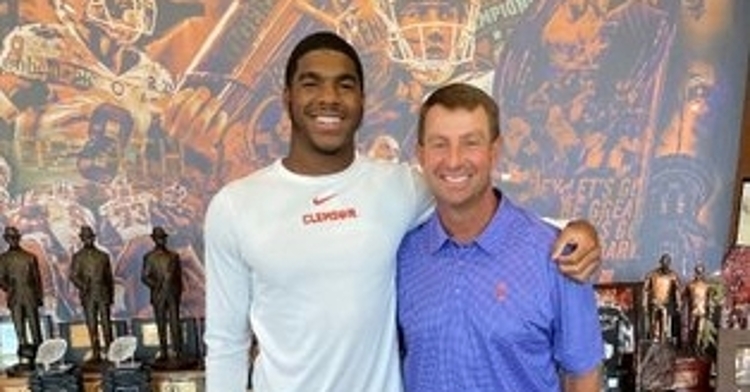 Clemson continues to recruit some of the top defensive ends in the nation and then send those defensive ends to the NFL, but a recent visit by one of the top targets for 2022 has him thinking what Clemson can do for him when his football career is over.

One of the top prospects nationally to visit Clemson last week was defenisve Jihaad Campbell (6-4 220) of Sicklerville, NJ and IMG Academy in Florida. Clemson has been among his favorites from the start along with Ohio State, Georgia, Florida, Penn State, Texas A&M, Oklahoma and Rutgers.

He’s a four-star prospect and ranked the No. 7 edge rusher nationally, and the No. 18 prospect in Florida in the 247Sports Composite. Last season he totaled 45 tackles and 7 sacks.

Campbell along with his mother, uncle and two brothers spent two days on the Clemson campus the middle of last week. He gave this review of his time with the Tigers:

“It was a great experience. A championship team and it showed by how the coaches displayed themselves. How the players focus and are locked in daily. It was just a great honor. I met with all the coaches and talked with some of the players. I toured around the facilities. The most important part I got from it was PAW Journey and life after football. How it takes you to a different level of developing young, successful men.”

Here’s what Campbell had to say about his sit-down meeting with head coach Dabo Swinney:

“He told me he and his staff have been on me for a long time, and he would love to see me at Clemson. All I’ve got to say is, I’m committing next month around July 11th. Everything is pretty equal right now.”

Campbell also has taken official visits to Ohio State and Florida. This weekend he travels to Georgia, and the following weekend he’ll take his official visit to Texas A&M. And Campbell said he likely will return to Clemson for the All-In Cookout in late July.