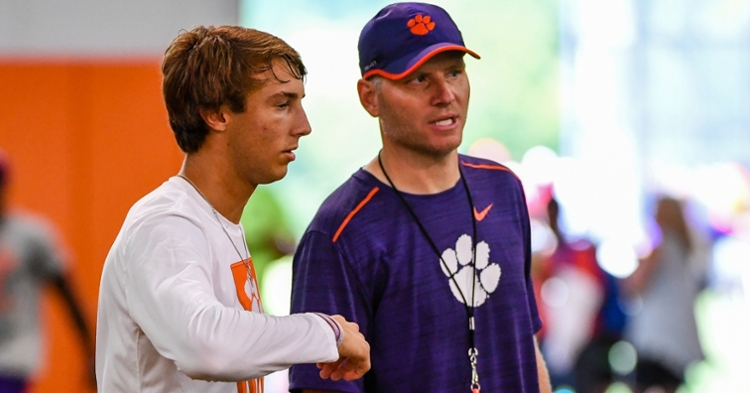 Clemson quarterback commit Cade Klubnik walked into Clemson’s football operations center and saw Dabo Swinney in his entirety, head to toe, and smiled. No more Zoom calls to try and get to know the Tigers’ head coach.

Klubnik attended the last day of Swinney’s high school camp, threw to fellow commit Adam Randall, took coaching from quarterbacks coach Brandon Streeter, former NFL quarterback JP Losman, and Swinney himself. He then stayed the rest of the weekend for the Elite Retreat.

All in all, a great time for Klubnik, the high 4-star out of Austin (TX) Westlake.

“It was honestly surreal. It felt like I was really in a dream. Nothing I was seeing was truly felt real,” Klubnik said. “The only time I've ever talked to these guys is their chest up in a rectangular screen. So, to be honest, to see their whole body and just feel their presence and see their facial expressions in real life, and to hear them talking and to just, not in a weird way, just feel them pat your back was amazing. It was super weird, but just so fun. And just knowing that I'm going to be there for the next four years. Gosh, I can't imagine being anywhere else.”

Klubnik developed an immediate rapport with Randall, a 4-star out of Myrtle Beach.

“Me and Adam Randall hung out probably the whole weekend. We were with each other probably 90% of the time,” Klubnik said. “He's an amazing guy. I'm so pumped to be throwing to him for the next four years. So, that'll be so fun.”

The Elite Retreat provided an opportunity to spend valuable time with the coaches.

“It was awesome. It was so fun just to hear all the coaches talk and to learn all more about the campus and the school and kind of what's next,” Klubnik said. “But I think it had a huge influence on so many guys that were there and weren't committed yet, like Sherrod (Covil) and Robert Gunn, the guy who just committed as a kicker. And then, most recently, Toriano (Pride). I think it just hit them like, okay, this is where I need to be. And I think the coaches just... I think they blew it out of the water. They just nailed it. And Coach Swinney, I don't know how anybody would ever hear him talk and say I don't want to go play for him. I don't get that. So it was just amazing.”

Klubnik said Swinney told the prospects he was excited about seeing them all arrive on campus.

“On Saturday, I think he ended up talking for about an hour and a half to all of us and we were all listening to what he had to say,” Klubnik said. “We didn't even know what to think. It was such a good message. So, I think he's just very excited for me as I am for him and to be there. And we're just really excited for January.”

Klubnik will be back on campus in July for the All In Cookout.