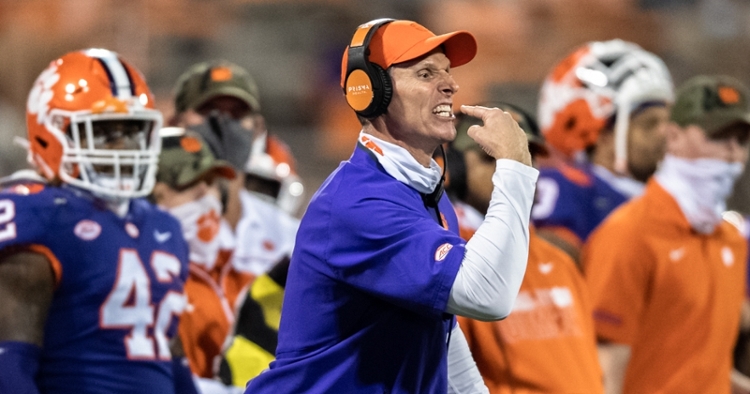 Venables is locked in for five more years.

Clemson defensive coordinator Brent Venables was given a five-year extension to his current contract by the Clemson Board of Trustees Compensation Committee Wednesday afternoon, and the extension includes a $100,000 per year increase that pays him $2.5 million per year.

The new contract runs through 2026.

"Brent’s was really kind of easy," Clemson athletic director Dan Radakovich said of the contract process. "I think if you look overall over the last five, six or seven years, part of the secret sauce if there really is any as it relates to the success of our football program is the fact that Dabo has been able to retain his assistants. He likes that. It’s great for the players. They have that constant voice. It’s good for Dabo. He continues to have the same people around him and that is something that is really important for the success of our program."

"We have had success so I think rewarding that success is important. So we have been able to do that. The Board has been very helpful in making that happen so we wanted to make sure we continue that into this year. We had one round of the folks we did back in February. Brent’s took a little longer and that’s why we are doing it today."

In his 25 years as a full-time assistant coach, his teams have 25 winning seasons, have been to 29 bowl games and have won 10+ games 21 times. He has coached in eight national championship games, helping Clemson to four berths and two titles. Also has a 13-2 mark in 15 conference championship games in which he’s coached, including a 6-0 record in ACC Championship Games with Clemson.

Clemson led the ACC in total defense (326.8 yards per game) in 2020 for the fourth time in five years. His 2020 group produced 46 sacks, tied for the most in the nation, despite no single player producing more than 4.5. A total of 21 Clemson players contributed at least half a sack, the most in the country and the most in a season in the Dabo Swinney era.

He coordinated a 2019 unit that did not allow its first 12 opponents to reach 300 yards, the first unit on record since 1996 to do so. Clemson finished in the Top 10 in total defense (228.3 yards per game) for a sixth straight season, the longest active streak in the country, and finished third in the country in scoring defense (13.5 points per game).

His defense held opponents to 20 or fewer points in 16 consecutive games across the 2018-19 seasons. A streak of that length had not occurred at Clemson in 79 years, when Hall of Fame coaches Jess Neely and Frank Howard combined for a 31-game streak across the 1937-40 seasons.

The Tigers led the country in scoring defense (13.1 points per game) for the first time in school history in 2018. Clemson ranked fourth in rushing defense (96.3 yards per game), fifth in total defense (285.9 yards per game). The unit set a school record with 54 sacks in 2018, the third-most by any FBS team in a season since 2000.

Venables was FootballScoop’s Defensive Coordinator of the Year in 2014 and Rivals’ Recruiter of the Year in 2015. He was a finalist for the 2015 Broyles Award after his defense finished fourth nationally in third-down conversion percentage (27.7) and in sacks per game (3.2) and fifth in tackles for loss per game (8.4).

Coming off of a historic first full season with the Tigers, softball coach John Rittman was given a raise as well to around the top-75 percentile of softball coaches, which checks out to $210,000 for next year's compensation and goes up in $15,000 yearly increments through 2025.

Women's basketball coach Amanda Butler received a pay bump to $450,000 per season with her contract running through 2024.