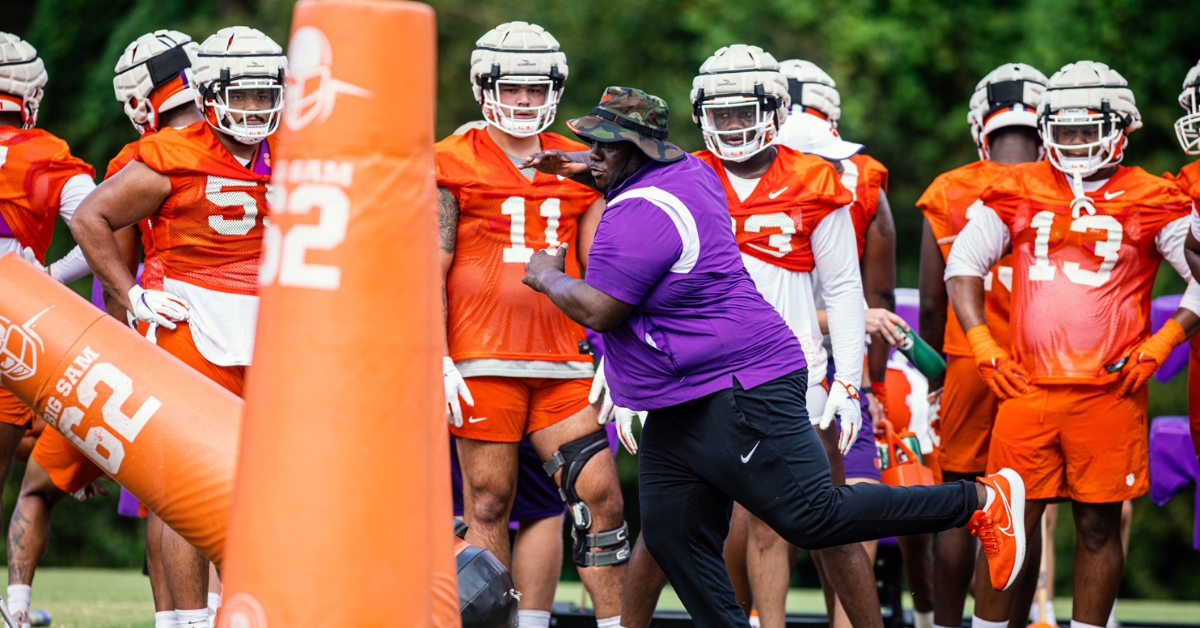 During Friday’s practice on Jervey Meadows, I followed a bevy of NFL scouts over to where Nick Eason was working with his defensive tackles. It wasn’t long before Lemanski Hall and his defensive ends joined the drills, and we all stood there watching what might be one of if not the best collection of defensive line talent in the nation.

Local radio and TV host Mark Childress and his son Faxon were standing behind me, and Mark said what we were all thinking. “There are going to be moments of terror for opposing offensive lines this season when they see that.”

This defensive line has a chance to be special, but we all knew that going in. Nothing we’ve seen in camp has dissuaded us from that notion, but it was good to hear the comments from observers at Saturday’s stadium scrimmage. Those observers said that the Tigers’ offensive line not only held its own, but even won the day.

As one person told me, “That Blake Miller is going to be special. He has a nasty streak, and when you put him beside Walker Parks, who also has a mean streak, that’s a good thing. There is a lot of attitude in there.”

Last year at this time, the coaches were telling us (trying to keep their troops motivated and confidence high) that the offensive line was going to be just fine and was excelling in practice. Others were telling us that it was going to be a work in progress all season. One former Tiger offensive lineman shook his head at me after observing last fall’s final scrimmage and said he had big concerns about center and how the line would hold up against Georgia’s NFL defensive line.

We all know how that turned out. But Parks told us that the line – and the offense as a whole – had a seismic shift the week of the Wake Forest game last season. They found some continuity and some confidence and some things that worked, and they’ve carried that over into fall camp.

According to Swinney, and what we’ve seen at practice and what others have told us, DJ Uiagalelei has taken huge strides. There is no doubt that his teammates love him, his coaches love him, and it was evident following Friday’s practice that Uiagalelei is doing everything he can to improve his leadership.

We were supposed to have him come over for interviews once practice ended, and football SID Ross Taylor must have walked 5,000 steps trying to chase Uiagalelei down. But first, there was a private huddle with all of the quarterbacks and quarterbacks coach Brandon Streeter. Then there was a private huddle with DJ and the quarterbacks. He then walked all over the practice fields, visiting each position group that still had players out working, and visited.

“I think that’s the role of the quarterback on the team,” Uiagalelei told me. “Just visiting with all of the guys and talking. I am a social guy. We talk about practice and the stuff that happened today. I am just talking to my guys on the team.”

Now, that doesn’t mean Cade Klubnik isn’t coming right along and pushing for that spot. He is. When we walked out onto Jervey Meadows, I was reminded of watching Trevor Lawrence, Chase Brice, and Kelly Bryant out on that same field a few years ago. You could tell that Lawrence was the guy and would be the guy. It was just a matter of time. This situation is different, and not because Klubnik isn’t good. He is. He will be a great one. But there is only one Trevor Lawrence.

One former player told me that he thinks the main difference between Klubnik and Uiagalelei right now is decision-making. So this battle will be fun to watch the rest of camp.

Another neat Klubnik note – he’s the football version of a gym rat. He’s also getting in extra work, he’s always throwing, and he’s always bouncing around with a huge smile on his face. One day last week we walked into the indoor practice facility at the end of practice and I heard him holler, “I’m open!!!”

He was running routes (not at full speed, not dangerous) for quarterback (wide receiver) Adam Randall. Randall is in a yellow jersey every day and he’s not fully cleared for practice yet, but Klubnik gladly stays late and works with Randall, just building that relationship and that camaraderie. And for the record, Randall isn’t terrible at those corner endzone throws.

And another neat Randall note – he was on the field after Saturday’s practice catching extra passes. Randall was working with “The Seeker,” a motorized robotic quarterback that the team is trying out. The Seeker holds six footballs at once, and when they are loaded it looks like cylinder of a revolver.

Randall is still wearing a brace, and he’s moving cautiously, but Swinney looked over at me and said, “Just wait 'til we get that guy back.”

For those wondering about The Seeker - it uses a variety of sensors, motors and software to throw passes to receivers who have a pager-sized tracking device attached to their hip. A touch-screen console comes with the robot that can hit a player in every route imaginable. It can also hold as many as six footballs, travel up to 100 yards and help receivers catch 500 balls in one hour. It is considered to be an upgrade over the Jugs machine, the longtime training equipment for football players that was created in the mid-1970s.

The receiver simply pushes the button what he wants and the machine delivers it on time, every time. I am not sure if the program is going to purchase the machine, but the players and student managers seem to enjoy it, and it’s more productive that the Jugs.

Here is a video of the machine so you can get a better idea of what it does.