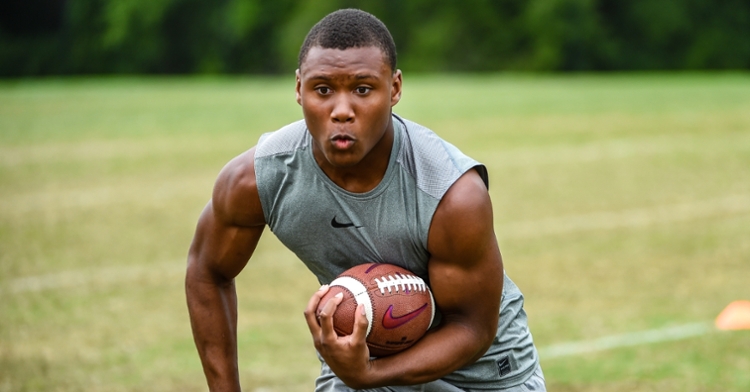 Another Keith Adams playing for the Tigers? A recent offer could make that happen.

Keith Adams Sr. was one of the greatest linebackers in Clemson history. He was a two-time All-American and the 1999 ACC Defensive Player of the Year. He went on to to play seven NFL seasons following in the footsteps of his father, Julius Adams, who was a Pro Bowl defensive lineman with the Patriots.

Next in line from the Adams family is 2022 RB Keith Adams Jr. (5-10 195) who is having a sensational high school career in Canton, GA. And Clemson would like him to follow in his father’s footsteps and join their program.

The Tigers recently made Adams a grayshirt offer, meaning they’d like him to enroll with the 2022 class and pay his own way for a semester, and then he would go on scholarship. Clemson is taking that approach with Adams figuring the numbers for the 22 class could be tight, but that doesn’t mean the Tigers are any less interested in Adams. And it doesn’t make Adams any less interested in them.

“I’ve been talking to the coaches for a couple of months and we’ve built a good relationship. Obviously, my dad knows the coaches,” Adams said. “I was surprised at the time they gave me the offer. I wasn’t expecting it at the time but I was definitely grateful for it. They said they liked my film and I’m like the most physical runner they’ve seen on film this year. I was telling them I’m ready to work and keep grinding.”

Adams has seen plenty of Clemson. He has camped there, visited there and been to a game there. So, he’s plenty familiar with the culture of the program and the brick and mortar of the campus. He could quickly pull the trigger on a commitment and no one would be surprised. But he also has an offer from Georgia Southern, and he’s drawn interest from USC, Florida State, Florida, Rice, USF, Stanford, Cal and Tennessee. He wants to see this recruiting thing play out just a little bit more.

“I’m going to leave my options open. They are going to stay open because it’s early in my recruiting and you never know,” Adams said. “I’m just going to leave it open for awhile, just keep everything open.”

Adams has compiled some impressive high school stats. At this point in his career, he’s rushed for 2550 yards and 27 touchdowns. He also has 22 receptions for 259 yards and 2 touchdowns. This season he’s averaging 138 rushing yards per game and nearly 7 yards per carry. Adams said there’s nothing fancy about his running style.

“If anybody gets in my way, I’m just going to run them over.”

He would like to make his decision sometime during his senior season.