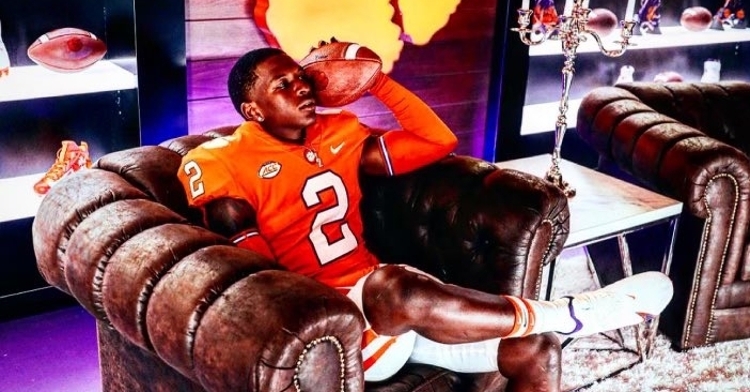 Covil poses with a football last week at Clemson.

Sherrod Covil made the trek to Clemson last week to try and find a reason to not go to Clemson. It turned out he couldn’t find a reason and he announced his commitment to the Tigers Thursday at the Rivals 5-star Challenge.

Covil is a 4-star 2022 safety out of Chesapeake (VA) Oscar Smith who has offers from Clemson, Miami, Penn St., Alabama, Notre Dame, Auburn, Georgia, LSU, Michigan, Ohio St., Oregon, Southern Cal, and a host of others. He has taken visits to Ohio St., Penn St., Virginia and Miami since June 1 and made the trip to Clemson last weekend for the Elite Retreat.

“It was actually really cool, and I ended up making some bonds with a few of them early,” Covil said of meeting the top Clemson targets on hand. “And a few of them told me that they were ready to commit and I should commit, too. I really just wanted to get down there to check it out or to basically find a reason not to go to Clemson, because that was always my dream school. So I just wanted to see what it was going to be like. And it was just even better than I expected.”

Covil said he already feels right at home on the Clemson campus.

“I also know some of the players down there. I know Malcolm Greene. I know Sheridan Jones,” Covil said. “So, yeah, that's some Virginia dudes, I know them. I actually talked to them and was getting together with them while I was there. So, that was cool, too. So, whenever I end up going there, I'll already have some people I know. So I am not just going to go in there like I don't know anybody.”

“The best moments for me while I was there was basically when coach Swinney was talking, because he can really motivate you,” he said. “He was kind of like inspirational and motivational. And one of the other best parts was his house, too, because I got to go to his house. We checked out the game room and the basketball court was crazy. And he likes to shoot and he will get out there and compete with you, that’s for sure.”

Safeties coach Mickey Conn also had a message for Covil.

“They told me the same things they’ve been telling me all along, which is a good sign,” Covil said. “They showed me how I fit in the defense, and the different roles I could play in the defense when I get there.”

What made him decide to go ahead and commit?

“What made me go ahead and commit is pretty much the whole retreat, the whole thing. Because I was telling you, I just wanted a reason not to commit, because it was already my dream since I was in eighth grade,” Covil said. “So, I was really just looking for a reason not to commit and they didn't give me no reason not to. So, I had to go ahead and pull that trigger. And how it happened was, after everything was over, said, and done on Saturday, after everybody had left, they had told me to stay back. And then I went in there and I talked to Coach Swinney and then we had a good conversation. And then that's just what happened. I knew, I had just knew. I just knew.”

Why is Clemson his dream school?

“When I was younger, I had already basically watched Clemson as I was growing up. And how they were always good,” he said. “And I was like, ‘I wanted to be there one day.’ I wanted to go win national championships and do stuff like that, just like they did. And then, the fact that I got to go there with a recruit when I was younger, when I was in eighth grade and he was in like 10th grade, and I got to see the campus and stuff and that was just amazing. So, and then I got a chance to go back and see how things had gotten better and all that, and I got to meet all the people. And the first time I went there, I didn't really get to meet the people. But I got to meet the people and everybody's great.

“Everybody's just genuine, nice, and then I just decided to pull the trigger.”

Covil is the first defensive pledge for Clemson's 2022 class, bringing it to six commits total and up 12 spots to 26th in the 247Sports Team Composite rankings. Clemson ranked third overall in average rating per commit going into the day.

Another 4-star defensive back who recently visited Clemson will announce his pledge on Friday in St. Louis (MO) cornerback Toriano Pride.