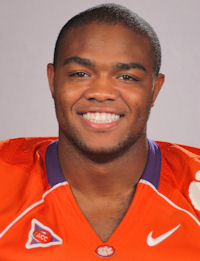 Linebacker
B I O
Overview: Second-team linebacker in 2009 who will challenge for a starting linebacker position as a senior...had an injury-plagued spring practice and has missed time due to injuries throughout his career...missed two games in 2009 with a concussion...started two games as a freshman and four as a sophomore...started the 2008 season at strongside linebacker, then came off the bench the second half of the season...started against Auburn in the 2007 Chick-fil-A Bowl and had a career-high 10 tackles as a freshman...had 33 tackles as a freshman, tied for the most by a first-year player that season...spent 18 days in Ghana in May of 2009 as part of a campus academic program...he was the only student-athlete at Clemson to make the trip.

2009: Had 16 tackles in 12 games...had one tackle in 10 snaps against Kentucky in the Music City Bowl to end his junior season...took part in 110 snaps on defense...played 41 snaps against Georgia Tech in the second game of the year and had four tackles...played 21 snaps against Coastal Carolina and had a pair of tackles...missed Wake Forest and Miami games as he recovered from a concussion suffered at Maryland...had three tackles in nine plays in ACC Championship game against Georgia Tech, all were special teams stops...honored as Clemson's top special teams player for the Georgia Tech game in the ACC Championship game by the Tigers coaching staff.

2008: Starter at strongside linebacker to open the season, then came off the bench in the second half of the year...averaged 20 snaps per game...played 37 snaps as a starter and had two tackles against #24 Alabama...had six tackles in 24 snaps against The Citadel...had five tackles in 36 snaps against N.C. State...played two snaps against S.C. State after missing practice (flu) during the week...came back to start and play 35 snaps against Maryland.

2007: Started two games, including the Chick-fil-A Bowl against #21 Auburn; he had a season-high 10 tackles in 66 snaps...played 183 snaps in 12 games...tied for the most tackles (33) by a Tiger freshman...had four tackles in 29 snaps against Central Michigan...had six tackles in 21 snaps against Furman...had five tackles in 15 snaps at Duke...played just 11 snaps in the last three regular-season games due to injury, but was healthy in the bowl game.

Before Clemson: First-team All-American by SuperPrep...#9 outside linebacker in the nation and member of the Rivals 250...#5 weakside linebacker in the nation by Scout.com...#27 linebacker in the nation by SuperPrep...All-American by PrepStar...#9 player in the state by SuperPrep...#10 player in the state by Rivals.com...Shrine Bowl selection at Lake City High School...had 89 tackles, 12 tackles for loss, and three sacks as a junior...had 495 rushing yards and seven touchdowns and eight catches for 149 yards in his career...had 247 career tackles, 38 tackles for loss, and seven sacks...recruited by Dabo Swinney...chose Clemson over Kentucky, Louisiana State, Michigan, N.C. State, Penn State, South Carolina, Tennessee, Virginia Tech, and West Virginia...born Oct. 11, 1988...majoring in community recreation, sport, & camp management.