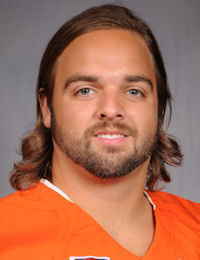 Defensive Tackle
B I O
Overview: Original walk-on defensive tackle who earned a letter as a junior...will provide valuable backup strength on the defensive line in 2010...tied for eighth on the team in the bench press with a 4050pound lift...original walk-on did not appear in a game in 2007 and 2008...named to Clemson's Academic Honor Roll for the fall semester of 2009...came to Clemson from nearby Hanna High School in Anderson, SC...first cousin of 2010 Tiger signee Jake Nicolopulos.

2009: Appeared in three games...played three snaps in the win over Boston College, three in the win over Wake Forest, and a career-high 11 snaps against Coastal Carolina.