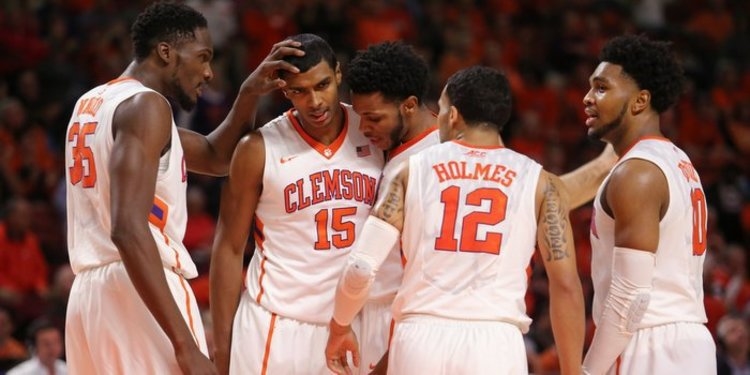 Tigers will need to regroup for road matchup against Georgia Tech

The Tigers had a nice effort in the first half by Jaron Blossomgame who had 14 points, two assists and a rebound.

Blossomgame continued his impressive showing with 19 points in the second half (33 points total) while the second highest scoring teammate was only 12 points (Djitte). Blossomgame's offensive showing against the Wolfpack may propel his selection as a future 1st team All-ACC performer. He had 11 straight gutsy points for the Tigers during a crucial stage late in the second half.

It was the most points in a game since Edward Scott had 36 against Florida State in 2002 according to Clemson SID.

Sidy Djitte came off the bench and had a solid showing with 12 points with 4-6 shooting and seven rebounds.

Defensively in the first half, Avry Holmes locked up North Carolina State star guard Cat Barber who only had 2 points and shot 0-6 from the floor. Barber finished the game with seven points on 1 for 12 shooting and was the ACC's leading scorer before the game at 23.7 points per contest.

The last two players that Avry Holmes has primarily guarded have gone a miserable 2-29 from the field.

One interesting statistic from the first half was that the Tigers did not have a single attempt from the charity stripe and did not shoot a free throw until the 13:36 mark left in the game.

Another oddity from the game was that the Tigers has a school record one turnover in the entire contest (16 assists to 1 assist ratio) while playing away from home (Wolfpack had 10). The Wolfpack had a rebounding margin (+13) over the Tigers of 43 to 30.

Clemson now has a 5-7 record in PNC Arena and the Wolfpack lead the overall series 101-50.

The Tigers are 2-7 on the road but still have winnable road games at Georgia Tech and Boston College with a tough home game against Virginia left on the schedule.

Clemson will next travel to McCamish Pavilion to battle Georgia Tech on Tuesday at 7 pm EST while the Wolfpack hosts #9 North Carolina on Wednesday.

Clemson vs NCSU Boxscore
Get the All-New Clemson Nike Shoe before it sells out!
Comment on this story