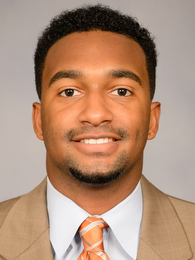 Guard
B I O
Overview: Signed in the fall of 2012 with the Tiger basketball program...provides the Tigers with an asset that was sorely lacking in 2012-13, shooting the basketball from long distance...left-handed player, much like fellow Tiger shooting guards Devin Coleman and Jordan Roper...comes from an athletic family...mother, Velda, was a track athlete at Appalachian State University and his father, Steven, played basketball at nearby Southern Wesleyan University...mother earned a master's degree from Clemson...attended same high school as former college standouts Stephen and Seth Curry...Stephen now players for the Golden State Warriors, and Seth was an All-ACC guard for Duke in 2013...school also produced current Virginia forwards Akil Mitchell and Anthony Gill...recruited by Assistant Coach Earl Grant...majoring in communication studies.

In Italy (August 2013): Averaged 7.0 points per game in four games...averaged 9.8 minutes per game and shot 8-for-18 from three-point range, a .444 clip...added six steals...did not score in the opener but posted eight or more over the final three games...capped trip with 11-point first quarter total against Airte...played trip-high 17 minutes in that win...made 3-of-5 from long distance for nine points in the game against the Vicenza All-Stars.

In High School: Three-star prospect according to ESPNU, Rivals.com and Scout.com...rated No. 7 prospect in the state of North Carolina by ESPNU...rated the nation's No. 31 prospect at his position by ESPNU...all-conference each of his last three seasons...named to All-South Charlotte boys basketball team as a senior...averaged 17 points per game as a senior...averaged 14 points per game and made 37 percent from three-point range as a junior in 2011-12...led school to three straight conference championships from 2009-12, including a runner-up finish in the state tournament in 2010-11...played AAU ball for Team Loaded, a Virginia-based program that won the prestigious Las Vegas FAB 48 Tournament in the summer of 2012...coached by Shonn Brown...born 9/4/94.