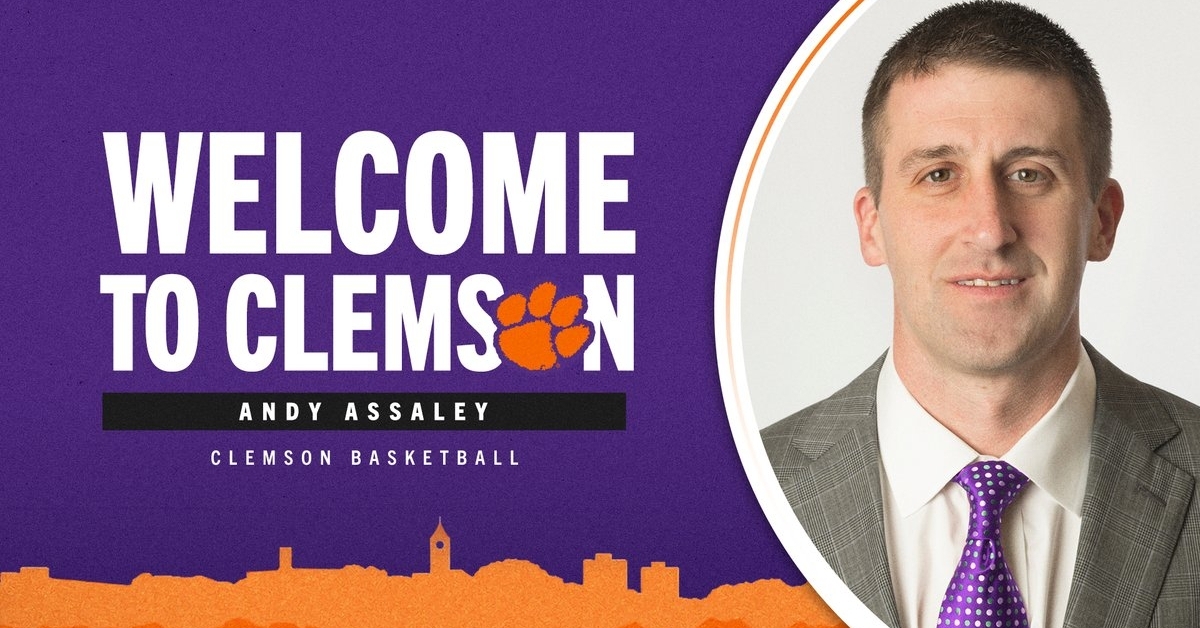 Assaley was previously was at South Carolina during Frank Martin's tenure. Assaley replaces Matt Bucklin, who departed Clemson to be an assistant coach at James Madison earlier this month.

The Gamecocks had success during Assaley’s time on staff. After the 2014-15 team posted its first winning record since the 2009-10 campaign, the 2015-16 Gamecocks put together one of the top seasons in their history, matching a school record for wins with a 25-9 overall record on the year, while the Gamecocks reached double-digit SEC wins for just the fourth time since joining the league, posting an 11-7 mark in conference contests, marking the Gamecocks’ best finish in the league since the SEC combined its East and West Divisions in 2012.

The 2016-17 season would be the best in school history, as the Gamecocks set a school record with 26 wins, advanced to the NCAA Tournament for the first time since 2004, posted the first program win in the NCAA Tournament since 1973, and advanced to the school’s first-ever Final Four, falling by just four points, 77-73, to Gonzaga in the national semifinals in Phoenix. South Carolina captured back-to-back 20-win seasons for the first time since a string of three-straight 20-win campaigns from 2003-2006, and the Gamecocks posted double-digit league victories for just the fifth time since joining the SEC in 1992. The Gamecocks also posted double-digit wins in SEC play again in 2019 and 2020.

Assaley was instrumental for the Gamecock staff in working with the academic advisor group at the Dodie Anderson Academic Enrichment Center. South Carolina has excelled in the classroom during Martin’s tenure as head coach, collecting numerous SEC and campus academic honors, while also several times earning the NABC’s Team Academic Excellence Award, honoring those program’s with a cumulative team GPA of 3.0 or higher for the season.

Prior to his time at South Carolina, Assaley played a key support role in helping to build the Kansas State program during his six seasons on staff with the Wildcats. The program posted at least 20 wins each season and advanced to the postseason every year, including four trips to the NCAA Tournament.

The Wildcats advanced to the Postseason NIT in 2007, Assaley’s first season on staff where he served as video coordinator, posting an overall record of 23-12, the first of six-consecutive 20-win campaigns by K-State. Assaley was named the director of operations shortly following the conclusion of the season.

Assaley played a role in the Wildcats posting their first NCAA Tournament victory since 1988 after posting a 21-12 overall record, including a third-place finish in the Big 12 with a 10-6 mark during the 2007-08 season. The finish in league play was the highest for the Wildcats since the inception of the league.

The 2008-09 squad posted 22 wins and earned an at-large bid to the Postseason NIT, which set the stage for a record-setting season in 2009-10, when the team posted a school-record 29 wins, en route to the program’s first NCAA Tournament Elite Eight appearance in over two decades. The Wildcats defeated six ranked opponents that season, and concluded the year ranked in the Top 10 in both the ESPN/USA Today Coaches Top 25 Poll (No. 7) and the Associated Press Top 25 Poll (No. 7).

Kansas State followed with two more 20-win seasons, compiling a 23-11 mark in 2010-11 and a 22-11 record during the 2011-12 season. The squad advanced to the NCAA Tournament third round both years, and finished third and fifth, respectively in the Big 12 during those seasons.

Assaley joined the K-State staff as video coordinator on April 26, 2006, for then-head coach Bob Huggins. Assaley spent the previous five years at Cincinnati in a number of capacities for both Huggins and Andy Kennedy, first serving as a volunteer, before being promoted to video coordinator and assistant to the head coach. During his tenure, the Bearcats posted 119 victories and advanced to the NCAA Tournament four times.

Assaley received both his bachelor’s and master’s degrees from Cincinnati, earning his undergraduate degree in economics in 1996 and his master’s in labor and employee relations in 1998. Assaley and his wife, Sarah, are the parents of three daughters, Cali, a recent graduate of the University of Louisiana Monroe where she played volleyball, Isabella and Payton, and a son, Will.

Welcome to Tigertown, @a_assaley?? Andy will serve as our director of basketball operations. ???? pic.twitter.com/hG48Bkcazb

Thank you for everything! Love you brother!!! It means the world to me all that you’ve shared with me along the way. https://t.co/NLGm5S1GFs