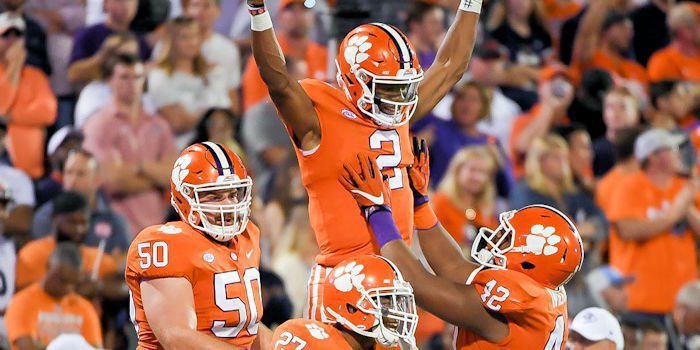 Slow start Saturday and another game that is is hard to take much from, but good to see a running game. So this week, Clemson goes to Georgia Tech and Syracuse hosts UConn and both Clemson and the Orange should be 4-0 when the revenge game comes up in 2 weeks. Who would have thought that the most important conference game of the year might be the Tigers against Syracuse? Maybe Florida State is just that bad but you can certainly not discount what Syracuse has done and not forget last year. It may be too early to call the game a must win but it is a huge one and yes we are talking football and not basketball.

Going into the season, I thought the ACC was going to be better but is it possible that Syracuse and Boston College are the best teams Clemson will play? I know you only worry about Clemson and rightly so but what are your thoughts on the ACC now and for the season and an early thought on whether the conference will only get a playoff team if they are undefeated? I know we are a top program again and have a great reputation, but I can see a potential of not having played an opponent that is ranked at the end of the year. All we can do is play the teams on the schedule and go 13-0 but after a 12-1 Wisconsin was left out last year, it just feels like we need to win all 13 of them.

FSU is a mess. I am not sure how they got here and what they have to do to fix it, but it is broken.

I have been a big fan of Dino Babers. His program has an identity. At this point, BC and Syracuse seem to be the second and third best teams in the division, but it is only mid-September. Let’s see more of each team in the next few weeks. NC State and Louisville lost a lot of good players from the last two seasons. Wake is a solid offense but has defensive issues. Let’s see how Virginia Tech gets through the Coastal.

A playoff berth is guaranteed at 13-0, as you stated. A 12-1 berth would depend on the other conference champions and their records. This is a long season and no one can say what those records will be. Let’s see how A&M’s season looks in a few weeks. That win might look better. Boston College and Virginia Tech are ranked this week. Let’s see how their seasons progress. The point is it is way to early to tell what is needed to get in.

A lot of people seem to be upset that Clemson is not winning “big” enough each week... is there any way to compare how many players Clemson is playing each week to how many Alabama, Georgia, or Ohio State has been playing?

A comparison like this could be helpful to show the difference between building valuable depth versus impressing voters.

If I am hearing the complaints right, I think some fans are questioning why they play so many reserves so early in games. Alabama, Georgia and Ohio State might play reserves later in blowouts, but Dabo plays them earlier in the games from what I observe. I am biased but Dabo has won 46-4 at a place that is tougher to win than those three schools. I am not going to second guess this staff. They are earned the respect.

I heard your comments in the quarterback stats this morning on your show but was driving. Can I get that from you on your blog? Thanks.