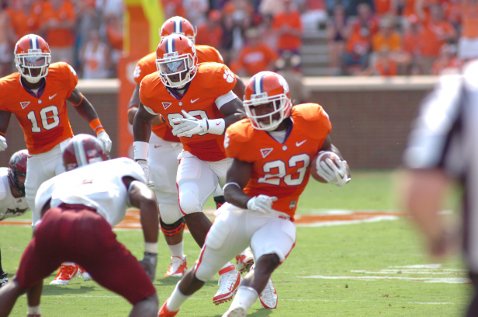 * Clemson is now 6-0 all-time against the Sun Belt conference.

*Today was Clemson’s first win over a Division I team from the state of Alabama since 1951 when the Tigers defeated Auburn, 34-0 at Clemson. Clemson has lost 20 in a row to teams from Alabama prior to today. The Tigers get another try in two weeks when Auburn comes to Clemson for the first time since 1970.

* Clemson is now 6-0 all-time on September 3, which is a Clemson record for the most wins without a loss on any date.

* Clemson scored 43 points in today’s game, the most in a season-opener since 1996 when the Tigers scored 54 points against Florida Atlantic to open the 2006 season. It is the most points Clemson has scored against a Division I team since 2009 when the Tigers won at NC State, 43-23.

View Full Profile also scored a touchdown in the fourth quarter on the fourth carry of his career.

* Clemson started the game going 0 for 9 on third-down conversions. However, Clemson converted on 5 of their final 7 third-downs to finish the game 5-for-16

*The 12 true freshmen who played today were Martavis Bryant

*In addition, the Tiger offense totaled 347 yards of total offense in the second half.

* Watkins’s touchdown came just 26 seconds into his career. That is the earliest a Clemson player has scored to start his career. The previous best was Terry Allen in 1987 when he scored with 8:53 remaining in the first quarter against Western Carolina. It is the earliest any Clemson player has scored to start a season since CJ. Spiller took the opening kickoff of the 2009 season for a touchdown.

* Watkins finished today’s game with 7 receptions for 81 yards. That is the most receptions and receiving yards by a Clemson player in his first game in Clemson history. The previous record for receiving yards was 64 yards by Terrance Roulhac in 1983 and Roscoe Crosby in 2001. The previous record for receptions in a first game was four by Aaron Kelly in 2005. Watkins also had two carries for five yards and a 12-yard punt return.

View Full Profile recorded two tackles in today’s game. He now has 17 career tackles, the most by a kicker in Clemson history.

View Full Profile ’s 54-yard touchdown reception in the second quarter was the longest reception of his career. His previous long came last season against Presbyterian when he had a 47-yard reception.

* Boyd finished the game 20 for 30 passing for 264 yards with three touchdowns and one interception. Boyd also completed the longest pass of his career with a 54-yard touchdown pass to Dwayne Allen in the second quarter.

*Boyd accomplished this in the first start of his career. Clemson quarterbacks are now 15-6 in their first career start since 1977. You could make a case that Boyd’s day was the second best on record by a Clemson quarterback in his first start. The best belongs to Charlie Whitehurst, who was 34-52 for 420 yards and four touchdowns at Duke in 2002. That is the Clemson record for passing yards in any game.

* Mike Bellamy’s 75-yard touchdown in the fourth quarter is the longest rush by a Clemson player on his first rush. The previous record was 72 yards by Craig Crawford against Wake Forest on Halloween in 1981. Bellamy finished the game with three carries for 81 yards and one touchdown. He also had 58 yards on kickoff returns, giving him 139 all-purpose yards.

* Jonathon Willard led the Tiger defense in today’s game with a career-high eight tackles. Jonathon Meeks added a career-high seven tackles and a fumble recovery for the Tigers. In addition, Coty Sensabaugh

View Full Profile , who suffered a knee injury in the second half that is not serious, had a fumble recovery in the first half, his 10th career takeaway. He has more than any other active Tiger.