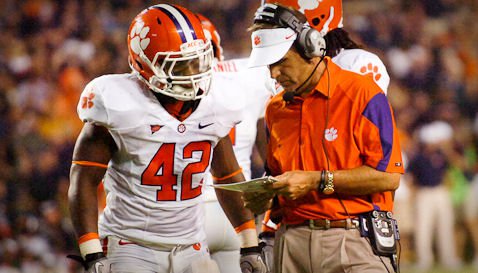 CLEMSON – Clemson defensive coordinator Kevin Steele met with the media following Tuesday’s practice, and the following is an edited transcript of his Q&A.

*On the energy of the defense after a long camp.

“We had good focus today. Had good energy. They are a little leg weary, but that’s expected. We’ll get those back.”

*On the rotation in the secondary.

“In the secondary, you’ve got Coty [Sensabaugh],[Xavier] Brewer, and [Bashaud] Breeland. They give us a mix at corner and in nickel with [Martin] Jenkins waiting in the wings. At safety, you’ve really got five guys- Fat Cat [ Jonathan Meeks

Jonathan Meeks
Safety
#5 6-1, 205
Rock Hill, SC
View Full Profile ], [Rashard] Hall, [Carlton] Lewis- that will play a good bit. They you’ve got [Garry] Peters who has been sick, but did some good things camp. And then Robert Smith

Robert Smith
Defensive Back
#27 5-11, 195
St. George, SC
View Full Profile , who has done some good things. That’s five guys that have at least got a bunch of reps this camp.”

*On the rotation at linebacker.

“At linebacker, Daniel [Andrews] is kind of the wild card guy because he can do them all. He has been hurt and can’t do a lot because of his knee, but what he does, he does well. He has been very limited in his reps. At SAM linebacker, you have Quandon [Christian], Justin Parker

Lateek Townsend
Linebacker
#20 6-2, 197
Bennettsville, SC
View Full Profile . They have all had good quality reps, and we are going to need those reps down the road. Then, at MIKE linebacker- depending on what package you are in and what you are trying to stop- you have [Corico] Hawkins, [Spencer] Shuey and Stephone [Anthony] . In the nickel package, we put Justin in that place. We’ve got four quality guys there in the nickel. In the money, we have Quandon who moves to SAM. Tig [Willard] is at WILL in the regular with Tony [Steward] and Colton [Walls]. All of them had good quality reps. We really haven’t decided yet which direction we are going to go, in terms of percentage of playing time, voiding a year, or not. “

*On how many freshman will avoid a redshirt season.

“Everybody is still on the bubble. We haven’t had the meeting to determine that yet. We will have that meeting within the next 24-48 hours.”

“Probably the biggest surprise of camp comes at a position that nobody asks about, and that is defensive tackle. DeShawn Williams

Grady Jarrett
Defensive Tackle
#50 6-2, 282
Conyers, GA
View Full Profile - they are young and have those old guys in front of them. But they have had a very good camp.”

“We don’t have as much experience. I am very concerned and more than concerned- about our depth up front. You line that first group up and you have a lot of playing time- Rennie [Moore], [Andre] Branch, Malliciah [Goodman], Brandon [Thompson, but past that [Tyler] Shatley is really the only one that has bit the bullet any except for Kourtnei Brown