It looks like you are using an ad-blocker. You may not have realized, but our team is mostly supported by ad revenue. TigerNet has provided free Clemson sports news for over 25 years. Help us keep doing that by turning off your ad blocker or joining our ad-free membership level. Thank you!
Go Ad-Free! Continue browsing TigerNet with your adblocker active with a monthly or annual Ultimate Level membership.
Allow sponsors to pay for your browsing Disable your adblocker on TigerNet and ads will fund your browsing.
Already an Ultimate Level member? Please Login | Need help? Contact support
BREAKING
Clemson defensive coordinator Brent Venables headed to Oklahoma 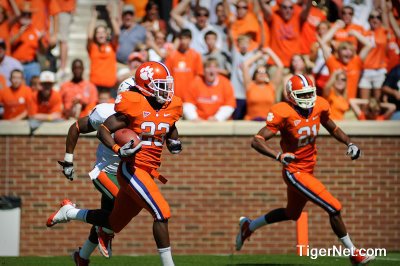 Ellington will miss at least one to two games

CLEMSON – Clemson head coach Dabo Swinney announced on Sunday that sophomore running back Andre Ellington (Moncks Corner, SC) will be out for at least couple of weeks due to a toe injury that he suffered at Boston College on Saturday.

Ellington leads the Tigers with 686 rushing yards and leads the ACC in all-purpose yards, and was originally diagnosed with turf toe, but Swinney said it looked now like it is a strained ligament.

The announcement came as part of Swinney’s weekly Sunday teleconference with the media.

Swinney said that Saturday’s loss to Boston College was “disappointing.”

“Obviously a very disappointing loss from yesterday,” he said. “The first half, we did not play as well as we would have liked to have played. We didn't give up a bunch of points, but had the 3rd-and-26 penalty. The biggest thing the first half was poor tackling. And we had three possessions. Second half, defensively, we really played very, very good.

“But overall defensively we played well enough to win. Offensively, we did not play well. That's very disappointing. We just missed some opportunities. We moved the ball. But we moved the ball down and missed field goals. They were 3-for-3 on field goals and we were 1-for-3. We had a critical play from Kyle [Parker] that cost us another opportunity. Just a poor job in the red zone. That created a lot of frustration.”

The Tigers stand at 4-4, and may struggle to become bowl eligible with Ellington out.

"It's not where we want to be, but it's where we are,” he said. “It's frustrating when you have four losses by six points or less. But it's over. Can't do anything about it but get ready for the next one. We still control how we finish. Anything can happen. We have to keep the players believing and see if we can have a really good November.

"The players will come in tomorrow, put this game to bed and get back to work and get ready for N.C. State. That's where we are right now. Not happy about it. But all we can control is how we finish and that's what we're going to try to concentrate on."

“Bad news is we're a beat-up football team,” he said. “Daniel {Andrews] is out, Carlton [Lewis] is out for at least this game. We're hopeful we might get Carlton back for the FSU game. Kourtnei's is a high ankle sprain but it's not as bad as David Smith's was. Kourtnei is definitely out for this week. Jaron looks fine. He looks like he'll be OK. His wasn't really bad at all. Byron [Maxwell] is getting better with his turf toe.

“Probably the biggest is Andre Ellington. We thought it was just kind of a turf toe, but an MRI looking at him, he's probably going to be out for a couple of weeks. Looks like he's got a strained ligament in his foot. It's creating a lot of pain for him. We have to let that thing kind of heal. That's probably the biggest injury. I'd say he's probably out for sure at least a couple of weeks. It's like his ligament has been strained away from the bone. It's

Swinney said that Jamie Harper would get most of the carries, but now expects redshirt freshman Hot Rod McDowell to step up.

“It'll be Jamie and we'll get Hot Rod back,” he said. “He's been waiting for his opportunity, and now it's here. He'll get an opportunity to show what he can do this week. He has shown some good promise in practice this week. He ought to have fresh legs. I'm excited to see him play."

Freshman kicker Chandler Catanzaro missed two field goals against the Eagles, and Swinney said following the game that if the Tigers had needed another kick, senior Richard Jackson would have gotten the nod.

The competition at kicker is once again open as the Tigers head into week nine.

“My intention going into tomorrow is that Richard will be first,” Swinney said. “Hopefully he'll perform well this week in practice. Catman is a young player who has done some good things. I hate it for him because he won the job on the practice field, but he has kind of struggled a little bit. We have a senior here who has been patient. We'll see what he can do."

Swinney was asked if it was time to get backup quarterback Tajh Boyd into some games, and Swinney answered only if the right opportunity arises.

“We've been forcing it every week and he has improved a ton and has gotten better,” he said of Boyd. “We constantly evaluate our personnel. We've got him ready to play. We just have to put him in there when we get an opportunity. Kyle did not play very well yesterday and he's got to be held accountable for that, but I don't want to create a notion that he's the reason we've lost four games.

“Yesterday he just made a really, really bad play and in a game like that it was glaring. He'll have to play better. But he's not the reason why we have four losses. The QB gets too much credit and too much blame. KP loves Clemson. He gave up a lot to come back here. He's played hard. He'll have to do better for us to have a chance to win.”

With the chance at playing for an ACC Championship seemingly out the window, Swinney was asked what goals he will set for his club.

"We just want to beat N.C. State,” he said. “Look, anything can happen in football. It's never over until it's over. What you have to do is keep believing and get better. You keep working and keep trying. You don't quit, ever. Anything can happen. Anything. With as much season as we have left, there's a lot of opportunity for us to finish on a positive note. We can't worry about anything else."

GREENSBORO, NC – The Atlantic Coast Conference Sunday announced the game times and networks for the football games of Nov. 6. The Georgia Tech at Virginia Tech Thursday night contest had been previously announced.